Pope Francis Says Refugees 'Are Not Dangerous, But In Danger' 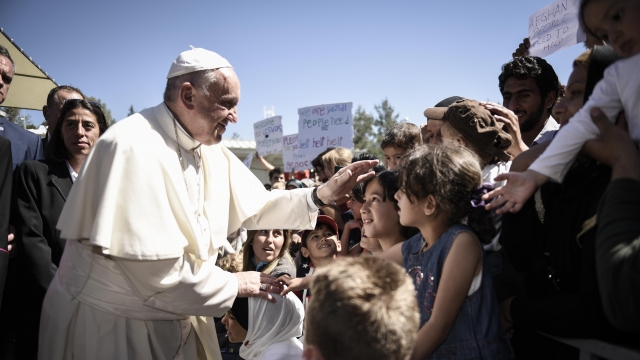 SMS
Pope Francis Says Refugees 'Are Not Dangerous, But In Danger'
By Ryan Biek
By Ryan Biek
May 29, 2016
After a deadly week for refugees trying to cross the Mediterranean Sea, Pope Francis told a group of children about the dangers refugees are facing.
SHOW TRANSCRIPT

While speaking in front of a group of children at the Vatican on Saturday, Pope Francis said refugees "are not dangerous, but in danger."

The pope's comments come shortly after a disastrous week for migrants crossing into Europe by water. Over 700 migrants drowned last week crossing the Mediterranean Sea en route from Africa to Italy. Some 13,000 migrants were rescued.

The pope also mourned the loss of one girl that couldn't be saved. He showed the children a life jacket he said was given to him by a Spanish rescue worker.

Despite deals that were supposed to lead to thousands of refugees being relocated from Italy and Greece to other European countries, growing resentment has led to only a small percentage of refugees being moved.

Illegal crossings have increased with the warmer weather, and many refugees are trying to make the trek to Europe in overcrowded and unseaworthy boats.

And while last year 58 percent of the refugees who went to Europe were men, this year the majority reportedly have been women and children.