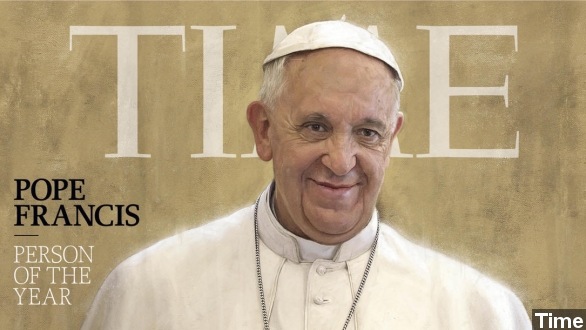 By Elizabeth Hagedorn
December 11, 2013
Time's runner-up for the person of the year was NSA whistleblower Edward Snowden.
SHOW TRANSCRIPT

Time has named Pope Francis as its person of the year for 2013.

The Catholic Church's first Jesuit and Latin American pope has changed the tone of the church, according to the magazine. Here's Time's managing editor Nancy Gibbs with more on the selection:

NANCY GIBBS: "He really stood out to us as someone who has changed the tone and the perception and the focus of one of the world’s largest institutions in an extraordinary way." (Via NBC)

After he succeeded Pope Benedict in March, the new pontiff called for a more modern church. (Via The Vatican)

From gay marriage to poverty, Francis has taken a more progressive stance on a range of social issues, signaling perhaps a new era of Catholicism. (Via Wikimedia Commons / Casa Rosada)

He made headlines this summer when he asked, "Who am I to judge?" in response to the future of gay clergy in the church. (Via ABC)

And he's won praise for his humility — he drives his own car, flies coach and even carries his own luggage. (Via The Washington Post)

Francis has also made clear he's everyone's pope. He's washed the feet of criminals, visited slums in Brazil, and most recently he gained attention all over the world for this photo showing him embracing a disfigured man. (Via CBS, CNN)

After Time's announcement, the Vatican released a statement Wednesday that read: "The Holy Father is not looking to become famous or to receive honors. But if the choice of Person of Year helps spread the message of the gospel — a message of God's love for everyone — he will certainly be happy about that." (Via Yahoo!)

The runner up — whistleblower Edward Snowden. He, of course, is the man behind the bombshell revelations of the NSA's massive surveillance programs. (Via Time)

Some have called him a traitor, others a hero for his decision to leak classified government materials. (Via The Guardian)