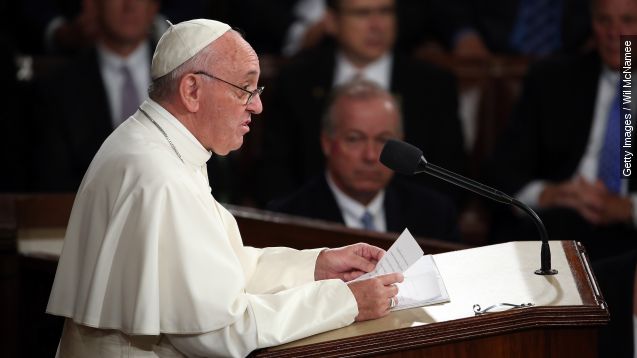 "Legislative activity is always based on care for the people. To this you have been invited, called, and convened by those who elected you," Pope Francis said. (Video via C-SPAN)

Pope Francis on Thursday became the first pope to address a joint session of Congress.

He made his first speech in the U.S. Wednesday, addressing climate change and immigration.

He stuck to those themes in his address to Congress, calling for an effort to "redirect our steps" to avoid "environmental deterioration caused by human activity."

He also compared U.S. immigration issues to the European refugee crisis, and called for compassion.

"We, the people of this continent, are not fearful of foreigners, because most of us were once foreigners. I say this to you as the son of immigrants, knowing that so many of you are also descendants of immigrants," he said.

The pope also called for protection of life at every stage of development, including an end to the death penalty.

"I am convinced that this way is the best, since every life is sacred, every human person is endowed with an inalienable dignity, and society can only benefit from the rehabilitation of those convicted of crimes."

Pope Francis is spending two days in Washington, D.C., before traveling to New York City and then Philadelphia.