Pope Francis Is OK With Spanking ... If Dignity Is Kept 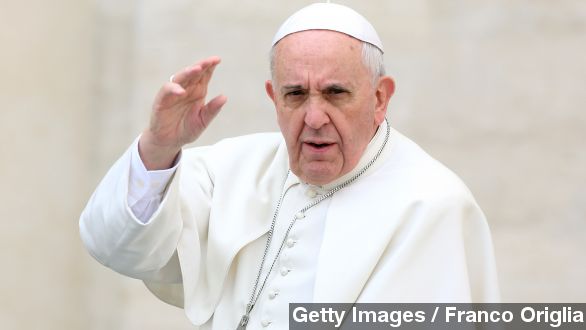 SMS
Pope Francis Is OK With Spanking ... If Dignity Is Kept
By Jake Godin
By Jake Godin
February 6, 2015
Whether he meant to or not, Pope Francis stepped into the corporal punishment debate during his weekly address by weighing in on spanking.
SHOW TRANSCRIPT

Pope Francis has weighed in on some pretty heavy topics during his papacy so far — gay marriage, jihadist militants, divorce and now, parenting. Specifically, spanking.

“Once at a marriage meeting, I heard a father say: ‘Sometimes I have to hit the children a bit, but never in the face so as not to demean them.’ That’s lovely. A sense of dignity,” Pope Francis said during his weekly address.

The parenting advice came during the Pope’s weekly general audience, which carried the theme of how to be a good father.

According to the Pope, a father who hits his child does so not to demean them but to instead punish them with dignity. Afterwards, the father moves on. (Video via Rome Reports)

Speaking to The Guardian, a reverend who works with the Vatican said the advice wasn’t actually about committing violence but instead “helping someone to grow and mature.”

The comments come almost a year after the United Nations criticized the Holy See for failing to protect children’s rights in areas such as sexual abuse and corporal punishment. (Video via Burning Red)

Corporal punishment in the home is a divisive issue. For some, spanking children is fine and a part of growing up. For others, it’s an outdated punishment that can be replaced with other methods.

“I guess he’s right, as long as you don’t humiliate him do it in your home talk to your child give him advice, why not?” Anna Sanchez told KHOU in response to the Pope’s comments.

So far, the Vatican has yet to release an official response on Pope Francis’s comments.