Pope Francis Has A Hand In Delayed iPhone Shipments 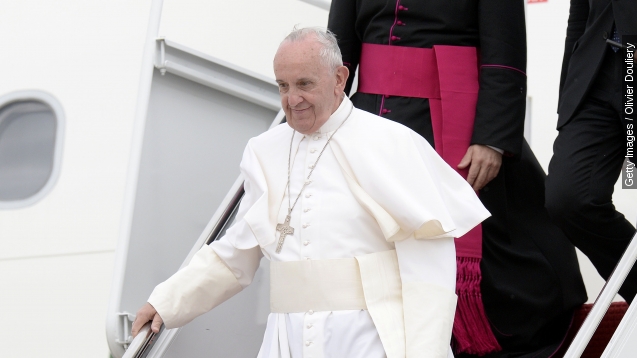 SMS
Pope Francis Has A Hand In Delayed iPhone Shipments
By Mikah Sargent
By Mikah Sargent
September 23, 2015
Some New Yorkers who pre-ordered iPhones are finding they'll have to wait until Saturday to get their new phones. And it's all thanks to Pope Francis.
SHOW TRANSCRIPT

New Yorkers who pre-ordered iPhones in time to get them on Friday might be in for a disappointing surprise.

Apple has reportedly reached out to some New York customers, warning them their iPhone deliveries could be delayed. (Video via Apple)

And apparently, it's all thanks to Pope Francis. In an email from Apple obtained by The Verge, the company warned traffic restrictions could result in delayed deliveries — delays as long as one whole day are possible. (Video via The Washington Post)

Yeah, one whole day. And we'd have to agree with The Verge on this one, which noted, "It's unclear what the point is of even offering to deliver the phone on Saturday — that's a full calendar day after the phone is on the market, at which point it'll be old news."

Curious if you'll have to wait on your sweet, sweet iPhone fix? According to Money, there are 11 ZIP codes in Washington, D.C., seven in NYC and 10 in Philly where UPS won't be delivering.

But hey, at least you'll be able to say the head of the Catholic church delayed your iPhone shipment — that's pretty cool, right? Perhaps a commemorative case would help ease the pain of a day-late delivery. (Video via The New York Times)