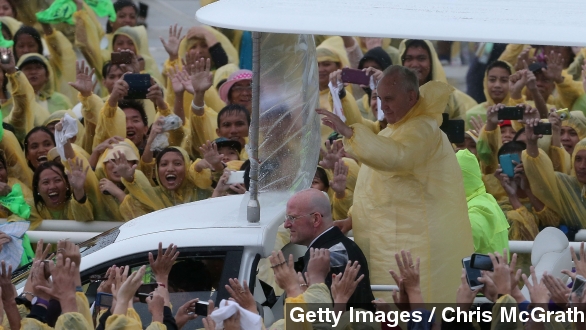 Pope Francis's trip to the Philippine city of Tacloban was cut short Saturday as Tropical Storm Mekkhala rolled in.

The pope says he made it a point to visit the city after hearing reports of the devastation Typhoon Haiyan caused in the area last year. The storm destroyed an estimated 90 percent of the city and killed thousands.

Francis planned to be in Tacloban for most of Saturday as part of his six-day tour of Asia, but the pilots of the Philippine Airline jet he was using warned him it might not be safe to travel too late in the afternoon. (Video via Fox News)

He braved the weather in the morning, greeting locals while wearing a yellow rain coat and speaking to them at an open-air mass. (Video via CNN)

And the pope had words of solidarity for those who lost loved ones in Typhoon Haiyan, saying, "I accompany you silently, with my heart."

After the mass, 27-year-old volunteer Kristel Mae Padasas was killed when strong winds caused scaffolding to fall on her. She had also volunteered during the aftermath of 2013's Typhoon Yolanda.

With Tropical Storm Mekkhala moving in, the Philippines is at risk from heavy rains and strong winds through Monday.