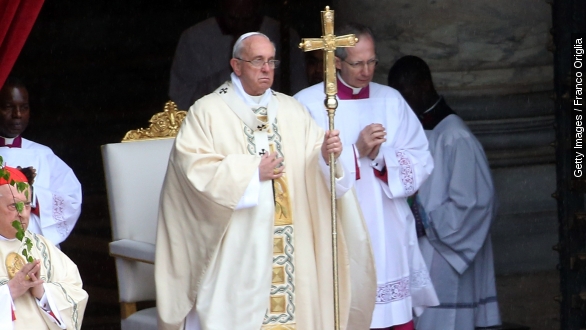 Despite a damp, rainy Sunday, tens of thousands from around the world gathered at St. Peter's Square to hear Pope Francis' annual Easter Sunday mass.

The pontiff expressed deep sorrow for recent violent acts around the world, mentioning attacks in Yemen, Syria, Iraq, nations in Africa and others. (Video via Euronews)

Specifically, Pope Francis mentioned the nearly 150 people who were shot and killed Thursday during an Al-Shabab raid of a Kenyan university. Many were killed because of their Christian faith. (Video via The Christian Broadcasting Network)

"Witness say the gunmen fired indiscriminately at first before beginning a deadly march from room to room, demanding to know if those inside were Muslim or Christian. Police said some Christians were shot on the spot," CBS reports.

Francis also prayed for peace in Ukraine where fighting continues despite a cease-fire agreed to months ago.

In a positive message, Francis praised the recent U.S.-led nuclear deal with Iran struck in Lausanne, Switzerland, this past week.

Francis said, "In hope, we entrust to the merciful Lord the framework recently agreed to in Lausanne, that it may be a definitive step toward a more secure and fraternal world."

While Francis' praise was relatively nonspecific, any praise for the deal contradicts the views of many Republican politicians.

"No one is asking Iran at all in this deal to stop its aggression in the region and its calls to annihilate Israel," Netanyahu said on CNN.

The pope's comments come just a few months before he's set to visit Washington, D.C., and Philadelphia in September, his first U.S. trip since he was elected pope in 2013.