Pope Francis Doesn't Expect To Be Pope Much Longer 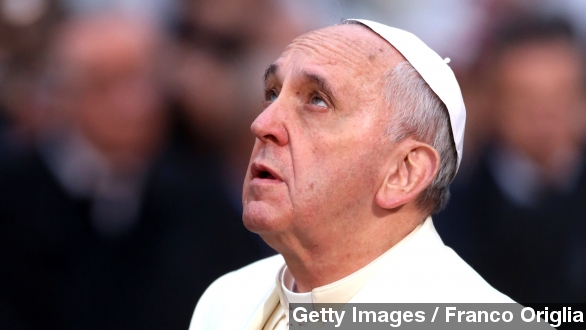 Pope Francis said Friday he doesn't expect to be Pope much longer, raising the questions — will Popes stepping down be the new norm? Or is Pope Francis just morbidly predicting his own death?

In an interview with Mexican broadcaster Noticieros Televisa, Pope Francis said, "I have the feeling that my Pontificate will be brief: 4 or 5 years; I do not know, even 2 or 3 ... I do not know. But I feel that the Lord has placed me here for a short time, and nothing more."

This all comes on the second anniversary of Pope Francis taking over after Pope Benedict stepped down.

Most popes have served until they died. According to The History Channel, at least 10 popes had resigned before the start of the 21st century, but before Benedict's resignation, the last to do so was Gregory XIII in 1415.

Francis praised Benedict for the move, saying, "I believe what Benedict did so bravely was open the door to the Popes emeriti... Benedict shouldn't be considered an exception but an institution." (Video via Vatican)

But Pope Francis said he doesn't think there should be a cut-off age when Popes should always retire. And he didn't rule out his death being the reason he leaves the papacy, saying "Maybe (Benedict) will be the only one for a long time, maybe he will not be the only one."

During the interview, Pope Francis also added he wishes he could go out without anyone recognizing him and eat at a pizzeria in peace.