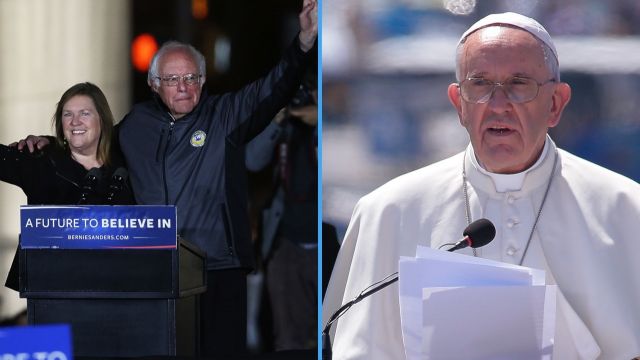 The pope emphasized that his meeting with Bernie Sanders was not necessarily a sign he was feeling the Bern. Sanders and his wife met Pope Francis in the Vatican residence just before the pope left to meet Syrian refugees in Greece.

Sanders flew to the Vatican to address the Pontifical Academy of Social Sciences, and while he was there, the Vermont senator had the opportunity to meet the pope.

Sanders told CBS that he and Pope Francis did not take photos so no one would interpret the meeting as political. Francis said meeting Sanders was simply "good manners" and that he had no intention of meddling in politics.

"If I was really being political, I would be in New York City right now and not in Rome," Bernie Sanders told CBS.

Last week rumors swirled that Sanders was invited to sit down with the pope. If true, it would have made him the only 2016 presidential candidate to receive such an invitation.

The Vatican squelched those rumors, saying there was no expectation the pope would meet with Sanders and that it was the Pontifical Academy that extended the invitation.

Sanders didn't spill any details of what the pope said during their meeting and told CNN, "I just wanted to let him know how appreciative I was and the extraordinary role he's playing throughout the world in raising consciousness about massive levels of income and wealth inequality."

This video includes images from Getty Images and clips from Bernie 2016, CBS and the Vatican.