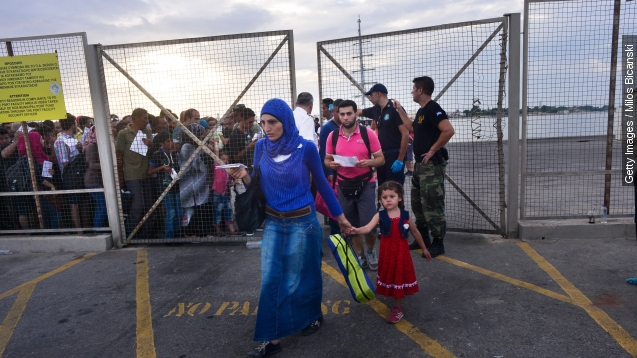 Pope Francis is calling on Europe's Catholics to offer aid to incoming refugees. During a Sunday service in Rome, Francis asked, "Every parish, every religious community, every monastery, every sanctuary of Europe, take in one family."

And the Vatican is no exception. Vatican Radio reports two of its parishes will each be caring for a refugee family in the next few days.

Francis' comments come as political leaders are stepping up their efforts. On Friday, the U.K.'s David Cameron pledged to take in thousands of migrants from Syria amid the ongoing crisis. (Video via BBC)

And Austria's interior minister said Saturday: "All of Europe must wake up now. The dreaming has to end now." (Video via CNN)

CNN reports Austria has let in roughly 11,000 migrants, yet only about a dozen have applied for asylum. Most have continued on to Germany. (Video via France 24)

But despite the wave of refugees Germany has welcomed, the government's patience may be wearing thin.

The country's foreign minister said, "The help in (Friday's) emergency situation was tied to an urgent reminder not to make that the practice for the coming days."

He also said Germany expected the rest of the European Union to follow the Dublin rules, which say refugees must apply for asylum in the first EU nation they enter.

Europe has over 122,000 Catholic parishes, according to a Georgetown University-based research group, and if each parish follows the Pope's request, it could help many of the more than 300,000 refugees who have already entered the continent. (Video via The Guardian)