Popcorn Time Gets An iOS App For Watching Pirated Movies 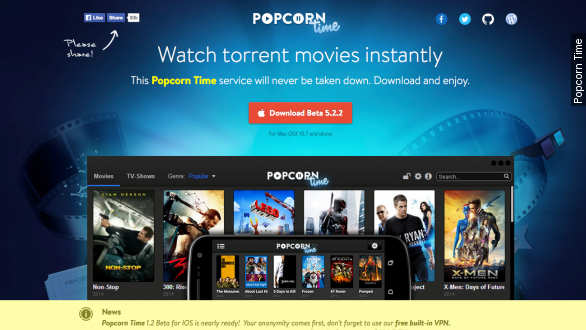 This week the service announced an app that could be installed on non-jailbroken devices. It joins those versions already available on Windows, Mac, Linux and Android.

As you might expect, it’s not something Apple is likely to let into its App Store. And it hasn’t.

According to TorrentFreak, Popcorn Time gets around this by skipping the App Store completely and running its own installer in violation of Apple’s terms of service.

Industry watchers expect Apple will be cracking down, somehow. The Motion Picture Association of America is already in an ongoing fight with Popcorn Time; it used the Digital Millennium Copyright Act to get Popcorn Time’s open-source files pulled from GitHub.

And legitimate competitors, such as Netflix, are worried, too. In a Q4 letter to shareholders, for example, Netflix CEO Reed Hastings described Popcorn Time’s rise as “sobering.” (Video via the Stanford Graduate School of Business)

Engadget explains: some users are willing to look past the illegality thanks to Popcorn Time’s enormous catalog and reliable quality. The latest movies and TV shows are immediately available. (Video via Paramount Pictures)

“Everything you want to watch for free. I can't get a paid service like HBO GO to provide better than a YouTube quality picture during peak hours, but if I want to steal content on Popcorn Time I'm golden.”

Popcorn Time’s operators have repeatedly held up a defense: providing an interface for the easy streaming of torrented movie files is not explicitly illegal.

But a legal expert who talked to Wired in a recent profile piece on Popcorn Time says the service is very much at risk of “contributory liability.”

“A service whose primary, intended function is aiding copyright infringement doesn’t need to host any files to be illegal.”

Apple has yet to issue official comment on the newly released rogue app.