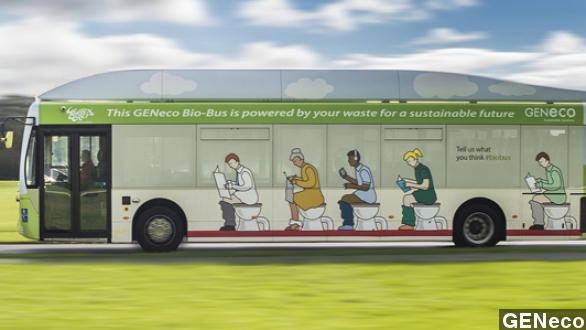 A new bio-bus is capturing British hearts and minds...and excrement.

GENeco, a subsidiary of the water and sewage utility in Southwest England, unveiled a bus that runs on bio-methane produced, in part, by human waste. (Video via Wessex Water)

The press has already dubbed it the "poo bus" and "the number two," the 40-seat single decker has been dropped into an existing shuttle route between the city of Bath and the Bristol Airport. (Video via ITV)

That's about a 20 mile trip and sees up to 10,000 passengers a month according to the Bath Bus Company, which runs the service.

The bus can travel up to 186 miles on a single tank gas, the equivalent of the annual deposits of 5 people. As one bus company spokesman told ODN, all joking aside, that human waste is a highly sustainable energy resource. (Video via The Telegraph)

"Bio-methane is not a fossil fuel. It's infinitely renewable. All the time there are people on the planet producing waste, the bio-methane will be produced. So it's carbon neutral."

GENeco says the bio-methane it generates can also be injected into the national grid and used to heat houses and powering stoves, not just buses. (Video via GENeco)

"So when you are cooking your breakfast at home you'll be cooking it on what you've just potentially flushed down the toilet," GENeco general manger Mohammed Saddiq told the BBC.

This is not the first time bio-methane buses have taken to the streets of Europe.

Back in 2009, Oslo converted 80 of its municipal buses to run on bio-methane as part of its plan to become carbon-neutral by the year 2050.

And the city of Iasi, Romania modified 30 of its buses to operate bio-methane in 2011.

The arrival of the bio-bus is almost perfect timing for the Bristol airport, as the city of Bristol itself has been named the European Green Capital for 2015.