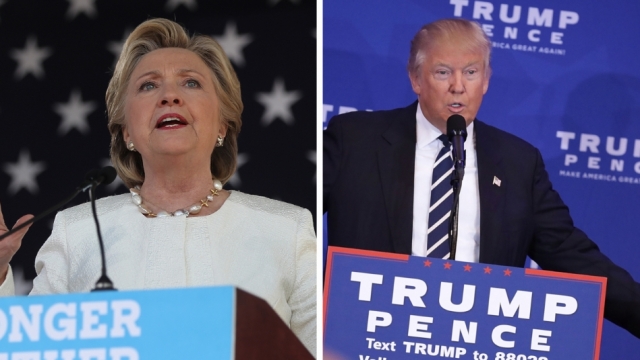 A new poll has Donald Trump and Hillary Clinton neck and neck in New Hampshire.

The poll from the WBUR poll gives Trump with a 1-point lead on his Democratic counterpart.

That lead is well within the 4.4 percentage-point margin of error.

The poll was conducted between Oct. 29 and Nov. 1.

Another poll from the same organization from about three weeks ago showed Clinton with a 3-point lead.

The latest WBUR poll also asked voters about the trustworthiness of each candidate. And 70 percent of people said Clinton is not honest and trustworthy. Trump didn't fare much better, with 60 percent of those surveyed saying the same about him.

Suffice it to say, this presidential race has tightened as we get closer to Election Day.

Drops in the polls have been seemingly linked to the candidate who had the most recent scandal.

Trump lost a considerable amount of ground following his "Access Hollywood" scandal, in which he bragged about groping women.

And Clinton lost favorability with some voters after FBI Director James Comey notified Congress about newly discovered emails that could be linked to the investigation of her private server.

The top two candidates are in a tight race in a few swing states. And some political experts are calling New Hampshire a must-win for Trump.

In Ohio, the latest Quinnipiac poll gives Trump a 5-point lead, and the RealClearPolitics polling average gives him a 3-point lead in the state.

In North Carolina, the latest poll shows Clinton with a 3-point lead, and the RealClearPolitics average has Clinton and Trump tied.