Poll Says US Race Relations Are At Their Lowest In Decades 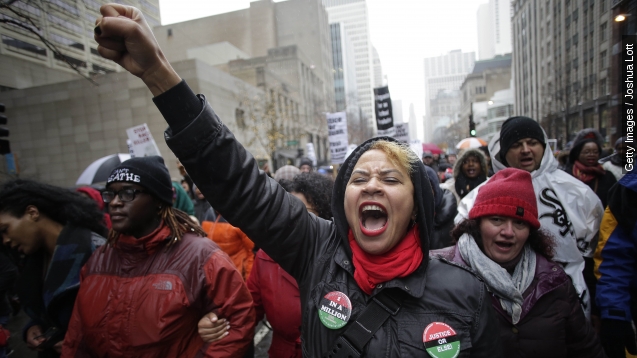 SMS
Poll Says US Race Relations Are At Their Lowest In Decades
By Grant Suneson
By Grant Suneson
December 17, 2015
According to a Wall Street Journal / NBC News Poll, race relations are at a 20-year low in the U.S. with 34% of people viewing them positively.
SHOW TRANSCRIPT

Race relations in America are at their lowest point in decades, according to a new Wall Street Journal/NBC News Poll.

The survey, conducted earlier in the month, found only 34 percent of Americans think the racial climate in the country is either fairly good or very good.

But those numbers have been dropping precipitously since 2012 after unarmed black teen Trayvon Martin was killed by George Zimmerman after he pursued Martin because he thought the teen looked “suspicious.”

The record pessimism this year was mostly attributed to high-profile police brutality cases across the country.

Incidents in Chicago; Baltimore; Ferguson, Missouri; and several other cities all drew massive protests from activists who claimed the deaths, all of black males, were racially motivated.

While each race surveyed concurred the racial climate in America is in rough shape, black respondents were much more likely to view race relations unfavorably.

The annual survey, which has been conducted for more than 20 years, hasn’t seen race relations viewed this poorly since October 1995 when O.J. Simpson was acquitted of murder in a racially divisive trial.

Unsurprisingly, politics played a part in the survey as well. The same poll found 22 percent of Democrats said use of force by the police was the most important news story of 2015, compared to just 7 percent of Republicans.

Fred Yang, who conducted the poll for The Wall Street Journal, said, “If you’re a Republican, you’re more oriented toward foreign policy or international issues. … Given who Democrats are, demographically and attitudinally, that’s just something they’re going to be concerned about.”