Poll: Most Americans Want The Government To Pay For Health Care 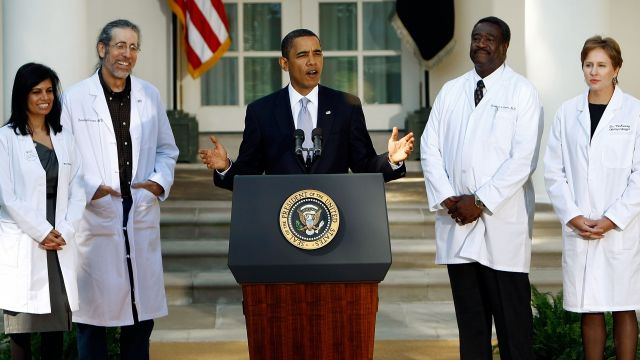 SMS
Poll: Most Americans Want The Government To Pay For Health Care
By Grant Suneson
By Grant Suneson
May 16, 2016
A new Gallup Poll shows 58 percent of Americans think the government should repeal Obamacare and replace it with federally funded health care.
SHOW TRANSCRIPT

A new Gallup Poll shows most Americans want the government to take on a bigger role in health care.

More than 1,500 people from across the country were surveyed, and 58 percent favor replacing the provisions set up by the Affordable Care Act with a federally funded health care program.

The ACA, or Obamacare, lets Americans buy insurance through the federal government, but the survey shows most citizens want the government to just pay for everything, or at least that's what they're saying now. In recent years, Americans have waffled on whether the government should pay their medical bills.

Polls show that Americans largely said the government had an obligation to provide health care during the George W. Bush administration, peaking at 69 percent in 2007.

After Obama was elected, support dropped off and opinions became more evenly split. But backing for a single-payer plan appears to be on the upswing.

One of the biggest challenges to implementing such a program in the U.S. is that we would basically have to start from scratch. But so did every other country with single-payer health care, and it seems to be working much better than the current U.S. system.

A 2013 study found the performance of the U.S. health care system ranked last when compared to 10 similarly advanced nations. Places like the U.K. and Switzerland, many of which use a single-payer system, beat the U.S. in care quality, availability and efficiency.

Despite the lackluster performance, the U.S. still has the most expensive health care system in the world. Now, its citizens seem to think there's room for improvement.

This video includes a clip from the White House and images from Getty Images.