Many Americans Don't Think Trump Can Carry Out His Agenda 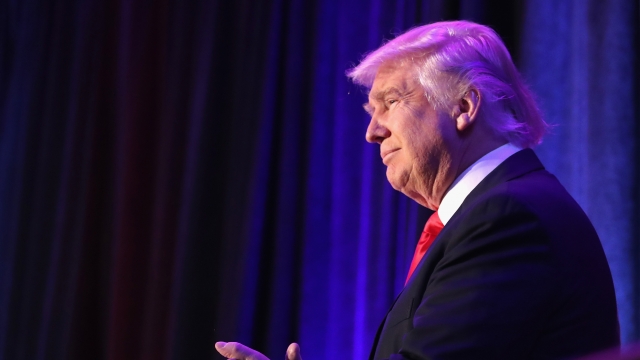 SMS
Many Americans Don't Think Trump Can Carry Out His Agenda

By Katherine Biek
November 16, 2016
Only 3 in 10 Americans surveyed said he has a mandate to fulfill his campaign promises.
SHOW TRANSCRIPT

Less than a third of Americans in a recent poll said president-elect Donald Trump has a mandate to carry out the agenda he laid out during his campaign.

That poll is from The Washington Post and the Schar School of Policy and Government. Instead, 59 percent of those surveyed said Trump should compromise with Democrats on parts of his policy agenda that they strongly oppose.

Since he was elected president Nov. 8, Trump has walked back a few campaign promises.

SEE MORE: Christie's Support Of Trump May Have Been A Long Time In The Making

"It's a disastrous plan and it has to be repealed and replaced," Trump said during the second presidential debate Oct. 9.

Trump told The Wall Street Journal he was considering keeping parts of the Affordable Care Act after meeting with President Barack Obama on Thursday.

And while Trump still plans to build a wall along the U.S.-Mexican border, during an interview with "60 Minutes" he said a fence might be more appropriate in certain areas.

And despite at first saying all undocumented immigrants needed to be deported, Trump says he's first focusing on deporting those with criminal records.

Although only 29 percent of Americans polled said Trump has a mandate to carry out his agenda, The Washington Post pointed out confidence in other presidents' agendas have never been very high.

When Obama was first elected in 2008, 50 percent of Americans polled said he had the authority. Only 41 percent said the same in 2000 after George W. Bush was elected.

Still, many Americans expect to see some major changes in the next four years. The poll found many are optimistic about an improving economy and increased living standards.

The survey, which includes responses from 423 Trump voters and 409 Clinton voters, has a margin of error of 4 percentage points.

Correction: An earlier version of this story misquoted Donald Trump's comments about his proposed border wall with Mexico. The video has been updated.