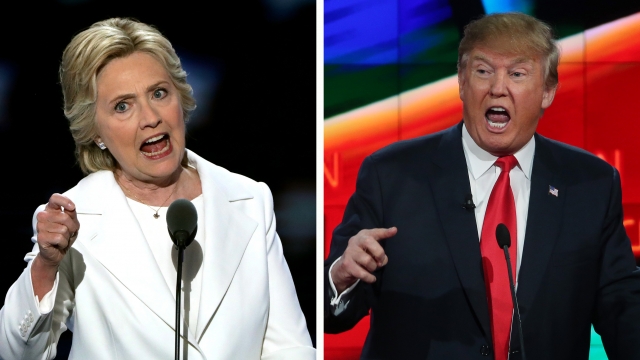 SMS
Here's Why Hillary Clinton Still Has Big Advantages Over Donald Trump
By Briana Koeneman
By Briana Koeneman
September 6, 2016
Polls show the gap between Trump and Clinton is closing, but a new survey suggests Clinton still has the edge over her opponent in a few areas.
SHOW TRANSCRIPT

With just weeks to go until election day, the race between Hillary Clinton and Donald Trump seems to be getting tighter and tighter.

But according to a new 50-state poll from The Washington Post and SurveyMonkey, Clinton still has some big advantages over her opponent.

The Post and SurveyMonkey polled more than 74,000 registered voters between Aug. 9 and Sept. 1.

And they found a big weakness in Trump's campaign — a low number of college-educated, white voters, especially women.

See, in recent elections, white college grads have voted Republican for the most part.

But the poll found Trump is trailing Clinton in this area across the country, even in some very red states.

According to the survey, Trump is struggling in several places, including Texas, Georgia and Arizona, even though Republicans have consistently won in those areas in the past.

And if he wants to win the election, he's going to have to win those states.

Still, the gap between Trump and Clinton has been getting smaller.

A new CNN poll out Tuesday suggests Trump has pulled ahead of Clinton by a mere 2 percentage points among likely voters.

But depending on which polls you look at, Clinton seems to be leading in a few key battleground states, like Pennsylvania.

And as CBS notes, Trump really needs to win those states "given his current electoral map."