Poll: 113th Is The Worst Congress Ever 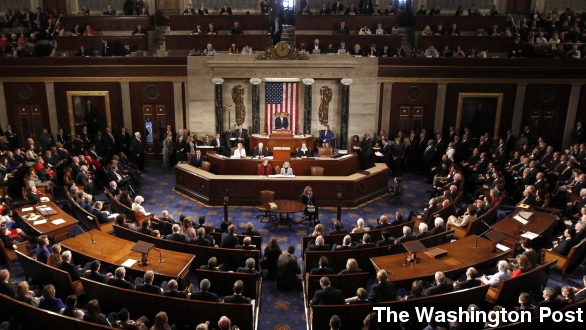 SMS
Poll: 113th Is The Worst Congress Ever

By Danny Matteson
December 26, 2013
The poll, conducted by ORC and CNN, found that 67% of Americans feel the current Congress is the worst in their lifetime.
SHOW TRANSCRIPT

​WORST. CONGRESS. EVER. ... at least according to a new CNN poll.

The poll, conducted by ORC and CNN, and released Thursday, found that some 67% of Americans feel the current Congress is the worst in their lifetime.

That along with nearly three-fourths of American’s saying Congress has done nothing to address the country’s problems. (Via CNN)

Those findings aren’t entirely surprising, considering we’ve been hearing this for months.

“You know it, I know it, and, yeah, they know it. This congress is ineffective, unhappy and unproductive. It’s possibly the worst congress ever.” (Via MSNBC)

“You know we did a segment on this not long ago and we put up on the screen that Congress has a lower approval rating than cockroaches and hemorrhoids. First of all, apparently hemorrhoids have an approval rating.” (Via The Tonight Show with Jay Leno)

“Congratulations Congress. You may be about to become the English language’s most offensive C-word.” (Via Comedy Central / "The Daily Show")

That’s pretty harsh, but maybe, not completely without merit.

As Govtrack reports, the 113th only passed 66 new laws during the 2013 session — the lowest since 1973. If you’re keeping track, there weren’t fewer that year, it just happened to be the first year they started keeping records.

And as NPR reports not all of those even made it on the books. “During this Congress' first yearlong session, just 58 bills became law — and many that did were about naming post offices or transferring federal lands.”

But what’s especially interesting about this particular poll is that it doesn’t break down into familiar political factions.

Quoted by The Week, CNN Polling Director Keating Holland said: "That sentiment exists among all demographic and political subgroups. Men, women, rich, poor, young, old — all think this year's Congress has been the worst they can remember.”

Of course, this poll is backed up by another staggering number, that of a 9% Congressional approval rating back in November. Those numbers are usually bad, but not single-digits bad. (Via Gallup)

But despite the dire state of affairs on Capitol Hill, there are still a few glimmers of hope. In his year-end press conference President Obama had this to say:

“2014 can be a breakthrough year for America. It's probably too early to declare an outbreak of bipartisanship, but it's also fair to say we're not condemned to endless gridlock.” (Via CNBC)

That was on the heels of Congress passing a bipartisan budget bill earlier in December. That bill could help avert government shutdowns for at least the next two years. (Via WJLA)

Of course, that new-found goodwill could be tested in late February or early March, when the U.S. is expected to once again hit the debt ceiling.