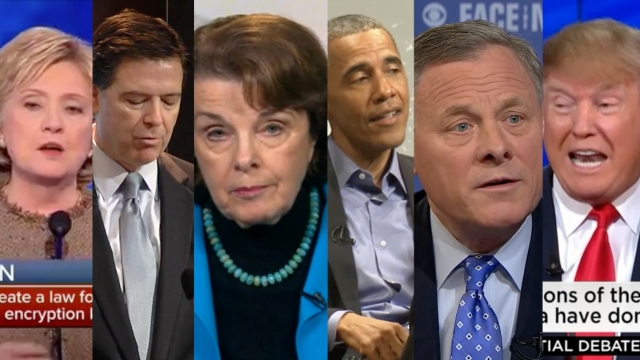 "It's a series of tubes," said Sen. Ted Stevens.

Politicians have never had the best grasp of technology. Today, that's most obvious when they and other government officials talk about the current big issue: encryption.

"I don't want them using our internet."

"We should be able to penetrate the internet and find out exactly where ISIS is and everything about ISIS," Donald Trump said.

That's what the NSA is trying to do. Foreign intelligence collection is literally in the mission statement.

"Technology has become the tool of choice for some very dangerous people."

And the tool of choice for just about everybody else, too.

"Unfortunately, the law has not kept pace with technology."

That's true. In its case with Apple, the FBI relied on the All Writs Act — which hasn't changed since 1789.

"And this disconnect has created a significant public safety problem we have long described as Going Dark," said FBI Director James Comey.

Security experts say that's not true. There are a few dark spots on the internet, but in general, law enforcement has more ways than ever to track criminal behavior online.

"The Achilles heel in the internet is encryption."

If anything, it's the other way around. Rights groups argue encryption is the opposite of a weakness.

"It's a black web. Even in commercial products. PlayStation, John, which our kids use. If the two ends communicate, that's encrypted," said Sen. Dianne Feinstein.

It sounds like she's describing end-to-end encryption. But Sony says it discloses information to law enforcement when so legally compelled — which it wouldn't be able to do if its services were secured end-to-end so only the users could see their communications.

"John, if we changed and we weren't talking about terrorism, we were talking about pedophilia, and the FBI's trying to make a law enforcement case … Would we want, with a legitimate court order, to be able to make that case based upon what they were transferring in encrypted networks? The answer's yes," said Sen. Richard Burr.

"If, in fact, you can't crack that at all — government can't get in — then everybody's walking around with a Swiss bank account in their pocket," said President Obama.

Yes, but if you give up the keys to that account, there's no telling who else might get hold of them.

"I don't know enough about the technology, Martha, to be able to say what it is," said Hillary Clinton.

And that's the problem.