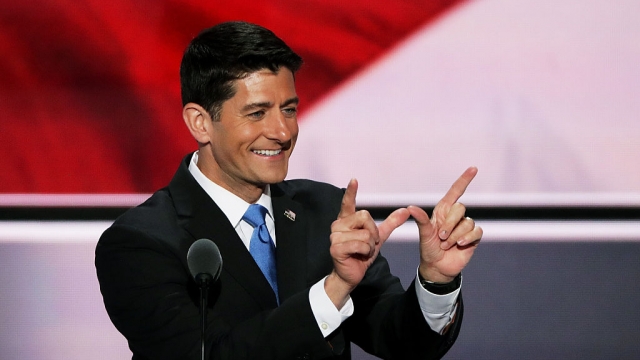 SMS
Politicians Pandering To Voters Via Sports Is Often A Swing And A Miss
By Grant Suneson
By Grant Suneson
July 19, 2016
Paul Ryan celebrated the Pittsburgh Steelers while in rival city Cleveland. He's another politician who should've thought twice before talking sports.
SHOW TRANSCRIPT

"I want to win this election so darn badly that I am willing to do this," House Speaker Paul Ryan said.

That's Ryan waving the Terrible Towel, a Pittsburgh Steelers' tradition, while talking to the Pennsylvania delegation at the Republican National Convention.

SEE MORE: Why Does Marco Rubio Want You To Call Him Bae?

The only problem is that the RNC is in Cleveland, home of the Steelers’ rivals the Cleveland Browns.

Ryan was blasted on Twitter for disrespecting the host city, joining a long list of politicians who've tried to pander using sports — only to strike out with voters.

During his 2004 presidential campaign, John Kerry seriously hurt his chances in Wisconsin by flubbing the name of the Green Bay Packers’ famous stadium, calling it Lambert Field instead of Lambeau Field.

Carly Fiorina was so desperate to drum up support ahead of this year's Iowa Republican caucus that she said she would cheer for the University of Iowa over her alma mater Stanford in the 2016 Rose Bowl.

It didn't work. The Hawkeyes got crushed 45-16, and Fiorina got less than 2 percent of the vote.

"You know, the amazing thing is that basketball ring," Cruz said at a rally in Indiana.

And his supporters didn't look happy about it.

Even successful campaigns aren't immune. Donald Trump said he was worried about attendance at a California rally because San Francisco was playing in the NBA finals.

The Golden State Warriors left San Francisco for Oakland in 1971.

Hillary Clinton hasn't had much to say about athletics this campaign, but she's no stranger to controversy over her sports loyalties.

“Well, now the fact is I've always been a Yankees fan," Clinton said on the "Today" show.

"I thought you were a Cubs fan," Katie Couric said.

"I am. I am a Cubs fan. But I needed an American League team," Clinton replied.