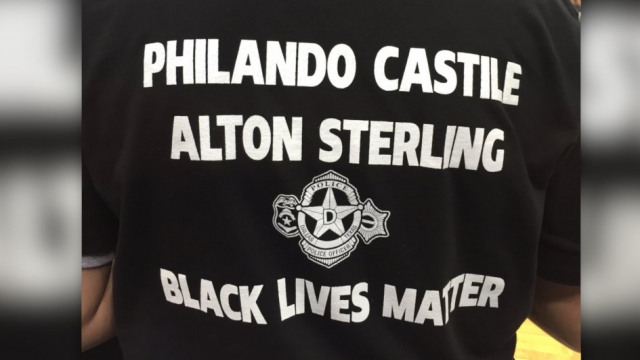 The Minneapolis Star Tribune reports the four officers were working security for the game on Saturday but left prematurely and took their names off the list for working future Lynx events.

Lt. Bob Kroll, president of the Minneapolis Police Federation, commended the officers' actions. He told the outlet, "If [the players] are going to keep their stance, all officers may refuse to work there."

The Lynx wore the shirts prior to their game against Dallas.

The shirts featured the shield for the Dallas Police Department, the name of Alton Sterling and the name of Philando Castile, who was shot by police in nearby Falcon Heights.

Lavish Reynolds, Philando Castile's girlfriend, described the shooting: "I begin to yell, 'But he's licensed to carry!' After that, he began to take off shots. Ba! Ba! Ba! Ba! 'Don't move!'"

Castile's death has sparked several protests in the Minneapolis area.

Over the weekend, protesters shut down a major highway in St. Paul for several hours. More than 100 protesters were arrested after police say the gathering got out of hand.

The Lynx reportedly still had private security at the game despite the officers' walkout. The team has yet to comment on the matter.

This video includes images from the Minnesota Lynx and Getty Images.