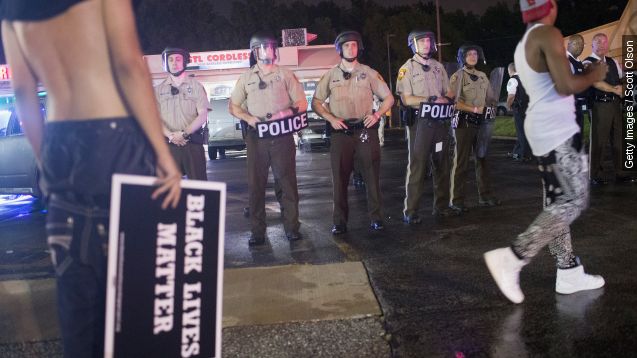 A state of emergency has been declared in Ferguson, Missouri after at least one officer-involved shooting marred largely peaceful demonstrations on the one-year anniversary of Michael Brown's death.

"We just want to be as patient as possible," Ferguson police chief Andre Anderson said.

"A message to those who are looti ..." a KMOV reporter starts to ask before being interrupted by gunshots.

Officials vowed last night's violence "will not be tolerated in a community that has worked so tirelessly over the last year to rebuild."

Shots first rang out around 11 p.m. local time. St. Louis County Police say at least one man is in critical but stable condition after two groups began shooting at each other. The man fled, but was wounded after reportedly pulling his gun on police in an unmarked SUV. (Video via KTVI)

"There is a small group of people out there that are intent on making sure we don't have peace that prevails," St. Louis County Police Chief Jon Belmar said during a press conference.

On Twitter, St. Louis police shared photos of at least two unmarked police cars that came under fire during the protests.

Local businesses were also looted during Sunday night's gatherings, but nothing on the scale of what occurred in the area nearly a year ago.