Police Say Mass Shooting At An Orlando Nightclub Was Terrorism 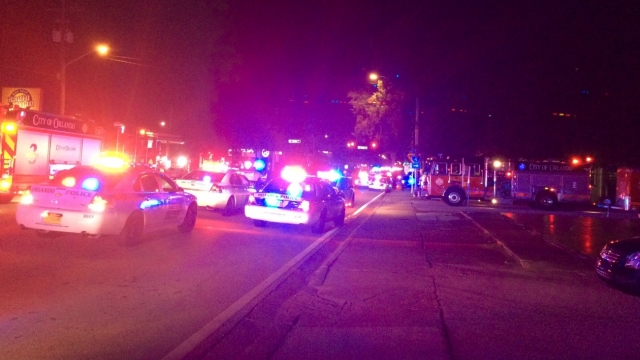 A shooter opened fire in an Orlando nightclub early Sunday morning, and now authorities are investigating it as an act of terrorism.

"Unfortunately, there are people who have succumbed to gunshot wounds, maybe about 20 inside the nightclub," Orlando Police Chief John Mina said.

Multiple law enforcement agencies including the FBI are investigating the shooting at  Pulse Orlando, a gay nightclub. Police say at least 42 people were taken to local hospitals with injuries.

The shooting reportedly happened around 2 a.m. Eastern. Shortly after, someone wrote on the Pulse Facebook page, "Everyone get out of pulse and keep running."

A police officer working at the nightclub initially responded. Two other officers nearby also responded to the scene, and police say it quickly became a hostage situation.

Witnesses near the scene reported hearing an explosion in the vicinity of the nightclub around 5 a.m., then gunfire about 15 minutes later, WKMG reports. Orlando police later confirmed the use of "two distractionary devices" to rescue about 30 hostages.

Police engaged in gunfire with the shooter, killing him. One officer was shot at, but police say it appears his helmet saved his life.

Police didn't say whether they were looking for other suspects in the shooting. Three Orlando area hospitals were put on lockdown as a precaution.

It's worth noting June is LGBT Pride Month, though as of Sunday morning, police had not announced a motive or the identity of the shooter.

Orlando police have been busy in the past few days. They responded to the fatal shooting of singer Christina Grimmie on Friday night. Police say there's no indication the nightclub shooting was related.

This video includes clips from Fox News, CNN, WOFL and NBC and images from the Orlando Police Department.