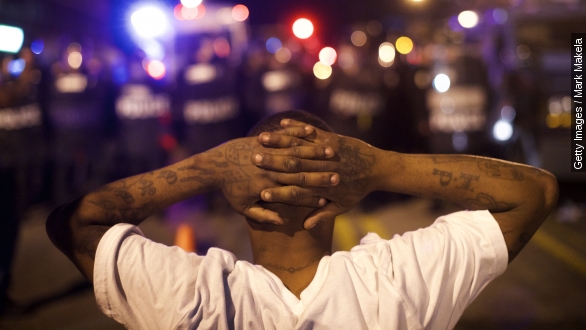 "It gives us an opportunity to clear the streets. And, if people are in violation of the curfew, if we feel it makes sense, we can start arresting people," Maryland Governor Larry Hogan said.

The situation appeared to be less volatile than Monday, though police reportedly used smoke canisters and pepper balls to try and disperse large protest gatherings. Officials say at least 10 people were arrested, most of them for violating curfew. (Video via WBFF)

According to CNN, one police captain said officers have been given a "wide range of discretion" over how they enforce the curfew, which started Tuesday and runs from 10 p.m. to 5 a.m. for one week.

"Police say, though, that whether you're driving, whether you're out walking, regardless of why you're out, they feel that, now that the curfew is in effect at 10:00, they have the right to pull you over, stop you, take you over to central booking and process you. So, they're going to charge you with a misdemeanor curfew violation," WMAR's Christian Schaffer said.

The city is still reeling from an intense night of violence Monday.

Businesses across the city were damaged. Multiple buildings and police vehicles were set on a fire. Police say the chaos and violence resulted in 235 arrests, while 20 officers were injured. (Video via ABC)

Governor Hogan declared a state of emergency Monday, and 2,000 National Guard soldiers were brought in to assist local law enforcement. (Video via WJZ-TV)

Elsewhere in the country, KMOV reports two people were shot near a protest gathering in Ferguson, Missouri, Tuesday night, though their conditions are unknown. Witnesses say protesters hurled rocks at police officers, though details of the shootings or whether it's connected to the events in Baltimore are unclear.

But, according to one anonymous firm's data mining obtained by Fox News, there could be a link between some protests in Baltimore and those in Ferguson.

"The firm ... found between 20 and 50 social media accounts in Baltimore that were also tied to the peak period of violence in Ferguson," suggesting "professional protesters" have been responsible for some of the violence in Baltimore.

Monday, the U.S. Department of Justice also announced it would send two officials to Baltimore in the coming days to address the situation.