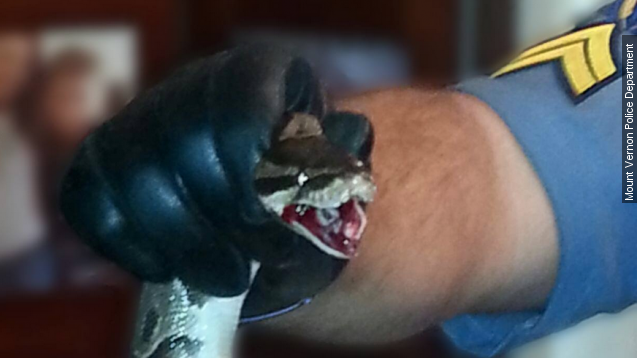 SMS
Police Officer Stops Python Attack With Butter Knife
By Ryan Biek
By Ryan Biek
September 27, 2015
Cpl. Shaun Cobb used a butter knife to free a Missouri woman from a 5-foot python that had latched on to her arm.
SHOW TRANSCRIPT

A Missouri police officer experienced a new kind of danger over the weekend: freeing a woman from a 5-foot python that was squeezing her arm tightly and digging in its teeth.

The snake reportedly attacked its owner while being moved to a different cage. The Mount Vernon Police Department said on its Facebook page that when Cpl. Shaun Cobb arrived at the woman's house, her arm had started to turn purple from a lack of circulation.

The Springfield News-Leader reports Cobb pried the snake's jaw open with a butter knife just enough to grab its head. From there he uncoiled the snake and placed it back in its cage.

The woman told the outlet, “I’ve had her for six years, but now I’m kind of scared of her. But I’ll tell you what, that officer was awesome.”

Thankfully, the snake isn't poisonous, and in the end its owner suffered only minor injuries.

This video includes images from the Mt. Vernon Police Department.