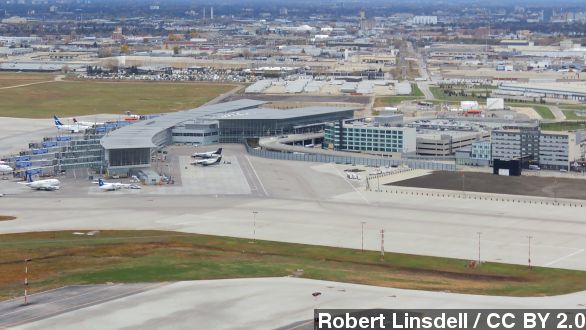 A chaotic scene unfolded at the Louis Armstrong New Orleans International Airport Friday night when authorities say a man armed with a machete and a can of wasp spray ran through the airport.

“This guy comes running with a machete over his head, swinging it through security,” a traveler told WWL-TV.

“Everyone in the area starting screaming. We all got down on the floor,” a traveler told WWL-TV.

Police say sixty-two-year-old Richard White, a taxi driver, “walked into the security checkpoint, pulled out a can of wasp spray and began spraying several TSA Agents as well as several passengers being processed at the checkpoint.”

“He proceeded past that checkpoint, and encountered the second TSA officer, and a third TSA officer … He sprayed the male in the face, and he struck the female with a machete that he pulled out," Sheriff Newell Normand said. (Video via WVUE)

A Boston Globe columnist in the crowd, described the chaos on Twitter: “Lots of terrified pple. Women crying… Everyone was hiding behind chairs and in doorways.”

A law enforcement officer on the scene fired three shots at White — striking him in the chest, face and thigh. White was then taken to a hospital for surgery, but later died from his injuries Saturday afternoon.

TSA officer and a bystander were also hit in the shooting. The Times-Picayune reports both had non-life threatening injuries.

Authorities say they don't believe White posed any threat to national security but are investigating. CNN reports he had no significant criminal history, aside from some disturbing the peace charges and traffic tickets.

New Orleans Mayor Mitch Landrieu said Friday night the situation was under control and the airport was secure.