Police Escort Jill Stein Away From The Presidential Debate Site 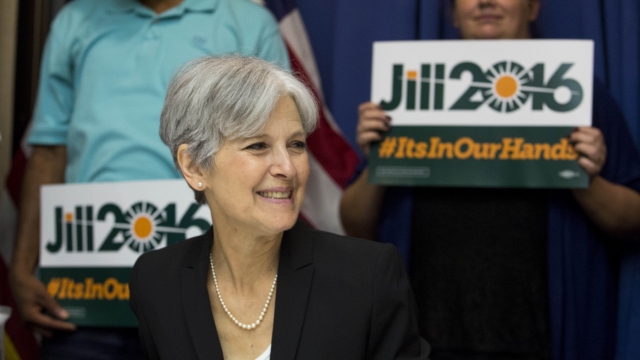 By Grant Suneson
September 26, 2016
Jill Stein was escorted away from the presidential debate site at Hofstra University for not having the proper credentials.
SHOW TRANSCRIPT

On debate night, security made sure the Green Party's candidate wasn't anywhere near the podium.

Jill Stein was talking to the press outside Hofstra University, the first presidential debate site, when police reportedly told her she would need to finish up her interviews and get off the campus immediately.

Police said Stein didn't have the credentials to get so close.

Stein left without incident — this time. During a 2012 debate, which just so happened to be at Hofstra University, Stein was arrested for disorderly conduct and shackled to a chair while the debate played out.

The Stein campaign said she wouldn't take the chance of getting arrested again because she and her running mate, Ajamu Baraka, already have warrants out for their arrest after they allegedly vandalized construction equipment at a Dakota Access Pipeline protest.

Though she was denied access again, Stein has a plan to get her message out to voters and avoid getting arrested this time around.

The Green Party candidate held a protest just outside the school's gates, calling for an end to the two-party system and saying the debates should be more open.

She's also planning to have her own version of the debate on Twitter, responding to the moderator's questions 140 characters at a time and answering questions from Twitter users.