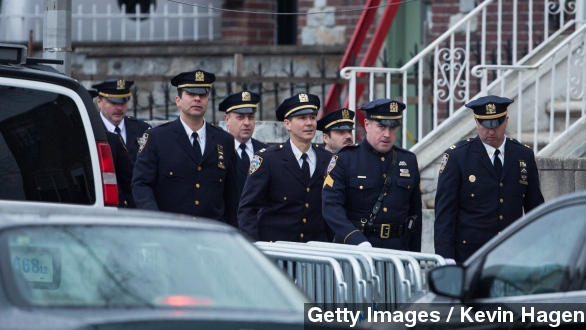 Liu was one of the two officers shot to death last month in their patrol car in Brooklyn.

A Chinese ceremony lead by Buddhist monks was followed by a traditional police ceremony.

“I do not know why there is so much evil and heartache in this world … What I believe with all my heart is our obligation is to make something good come of tragedy.” Comey said.

“All of our city is heartbroken today. … All of the city is feeling the pain right now and all of the city wants to lift up the Liu family,” de Blasio said.

Some officers in the crowd turned their backs when de Blasio spoke, as some also did at the funeral for Liu’s partner, Rafael Ramos, last week.

The mayor has been heavily criticized for encouraging anti-police sentiments as he has supported protest against police brutality.

Before the funeral, Police Commissioner Bill Bratton requested that officers not protest de Blasio at Liu’s funeral saying the day was about “grieving, not grievance.”