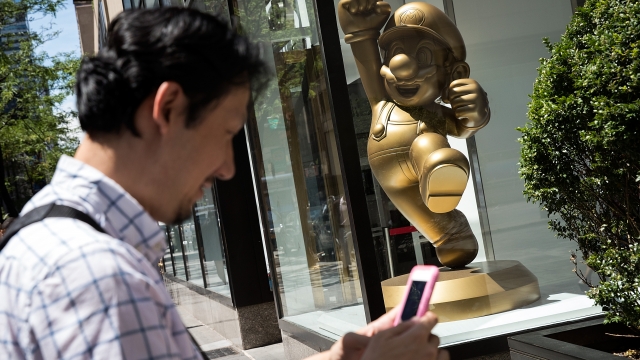 SMS
'Pokémon Go' Has Doubled Nintendo's Stock Valuation
By Ben Lawson
By Ben Lawson
July 19, 2016
Nintendo was struggling after the flop of its Wii U console, but the company is now worth more than Sony.
SHOW TRANSCRIPT

So much for the console wars. Nintendo is now more valuable than Sony.

"Pokémon Go"'s success has doubled Nintendo's stock valuation to $42.5 billion as of Tuesday morning. Sony was sitting at about $38 billion.

Just a few weeks ago, much of the conversation about Nintendo was centered on its recent hardware flop, the Wii U.

But it looks like Nintendo doesn't need a gaming console to prove it can still be a giant.

"Pokémon Go" will have to prove it's more than just a fad in order to make an impact, but one Bloomberg analyst seems to think it could stick around.

"This feels like a real paradigm shift in a way that — when I went back to university in the mid-2000s and I heard about this thing, Facebook. It's a little bit like that moment," said one analyst.

Nintendo ignored mobile games for years, and it wasn't until its recent struggles that it finally committed to making games for smartphones.

And "Pokémon Go" is just the first game in Nintendo's mobile expansion. It has at least two other free-to-play games in development, as well.

This video includes clips from Pokémon and Nintendo, and images from Getty Images.