Pluto Probe Will Give Best Look Yet At Dwarf Planet 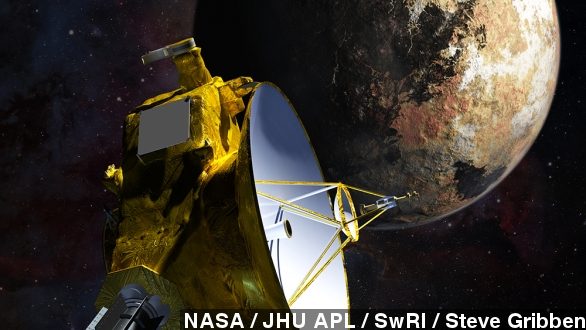 SMS
Pluto Probe Will Give Best Look Yet At Dwarf Planet
By Evan Thomas
By Evan Thomas
January 17, 2015
New Horizons has been on its way to Pluto for almost nine years to the day. Now it’s time to go to work.
SHOW TRANSCRIPT

At long last, New Horizons is ready to start its study of Pluto.

NASA reports the unmanned probe's wake-up sequence is complete and it's ready to start work. On Sunday, January 25, it will take the first of its long-range approach pictures.

New Horizons is the first probe we've sent specifically to study Pluto. The dwarf planet is 4.67 billion miles from Earth, so it's not exactly easy to learn about.

In fact, New Horizons has been traveling since January 2006. It left Earth when Pluto was still a full-fledged planet.

It wasn’t until August of 2006 that the International Astronomical Union decided Pluto didn't meet all the requirements for planethood.

Now, New Horizons is one of the fastest outbound objects we Earthlings have ever sent into space. It's currently closing on Pluto at about 37,000 miles per hour.

Only Voyager I is moving faster away from the sun, thanks to gravity assists it performed around Jupiter and Saturn on its way out of the Solar System.

But even with its speed, New Horizons won't be getting to close flyby range until July. NASA says Pluto will resemble a bright speck until May at the earliest.

But when it does arrive, the probe will provide researchers with the best data they’ve ever had on Pluto and its moons.

Its research will continue until about this time next year. Once its Pluto flyby is complete, mission planners intend to send the probe toward tiny celestial objects in the Kuiper belt at the outer edge of the solar system.