Playboy's Plan For The New Generation? No More Nudes 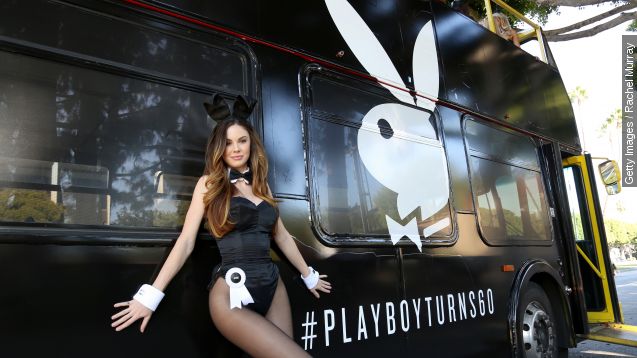 SMS
Playboy's Plan For The New Generation? No More Nudes

By Matt Moreno
October 13, 2015
Removing nudity from Playboy magazine seems like a bad business move, but the scandalous publication has had success with the strategy before.
SHOW TRANSCRIPT

No more nudity in Playboy. What seems like the staple of the popular and provocative magazine will cease to exist. The 60-year-old magazine is making a bold change to keep up with a new generation of readers. (Video via Playboy)

According to The New York Times, the decision was made in a meeting between editor-in-chief Hugh Hefner and the magazine's top editor, Cory Jones. They both said there's no sense in competing with the free sexually explicit content on the Internet.

Jones said: "That battle has been fought and won. You're now one click away from every sex act imaginable for free. And so it's just passe at this juncture."

For a while now, people have talked about the future of Playboy, it's 89-year-old founder and the crossover to the digital age.

Hefner said when the time is right, his youngest son, Cooper, will become the public face of the company.

"I think we live in a digital age, and I think that's something dad has done very well and kept up with that. ... I think that that's the new frontier for the magazine as well as the rest of the company. So making that leap is what's going to be that challenge," Cooper Hefner told The Wall Street Journal.

Now, the magazine isn't dropping its sex appeal completely. When the redesign comes out in March, it will still feature women in risque poses, but the fully nude photos will be gone.

But can Playboy still work without nudity?

The company said when it dropped nudity from its website last year, unique visitors per month quadrupled, and the average age of readers dropped to about 30 years old, a coveted demographic for advertisers.