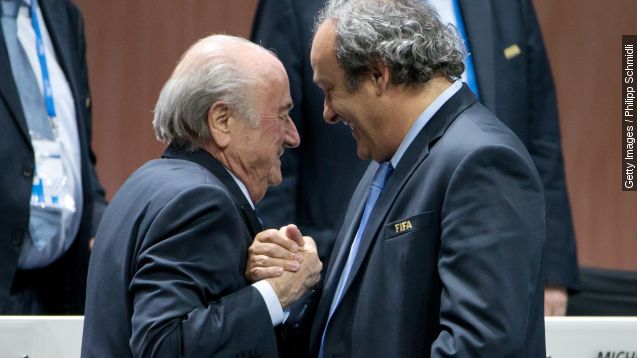 SMS
Platini's FIFA Campaign Stained After Scandal Allegations
By Mari Jo Valero
By Mari Jo Valero
September 25, 2015
Michel Platini's campaign to become the next President of FIFA is getting mired in the scandal surrounding the organization.
SHOW TRANSCRIPT

The Swiss criminal investigation into FIFA President Sepp Blatter is also causing a headache for those close to him.

Michel Platini — the latest name to be brought up in the case — is the current president of European football’s governing body and the biggest contender to succeed Blatter when he steps down in February.

Although Platini is not under criminal investigation, Swiss authorities are focusing on a reported payment of two million Swiss francs he might have received from Blatter.

The payment was reportedly given to Platini "for work performed between January 1999 and June 2002," according to the Swiss attorney general's office.

Blatter is currently under investigation for what has been labeled a "disloyal payment," along with charges of criminal mismanagement or misappropriation. Platini might not be at the center of the scandal, but his image has been tainted. (Video via SNTV)

There is also the question of Blatter's personal ties to Platini.

One of Platini’s rivals for the upcoming FIFA election, South Korea's Chung Mong-Joon, has said Platini's candidacy is tainted because of his close relationship to Blatter. (Video via YTN)

Platini said in a statement the payment he received from Blatter was above board and added he's open to speak to authorities. Platini even openly asked Blatter to resign after the first FIFA crackdown put nine officials behind bars back in May.

"I said, 'Sepp, you have to leave' … I said, 'we are friends. Politically, it is difficult sometimes to be friends but we will be friends after,'" Platini said.

Platini is one of several officials to declare their interest in succeeding Blatter. Others include Prince Ali bin Al Hussein of Jordan, Liberian Musa Bility, former Brazil star Zico and the aforementioned Chung Mong-Joon. (Video via CCTV, Arirang)