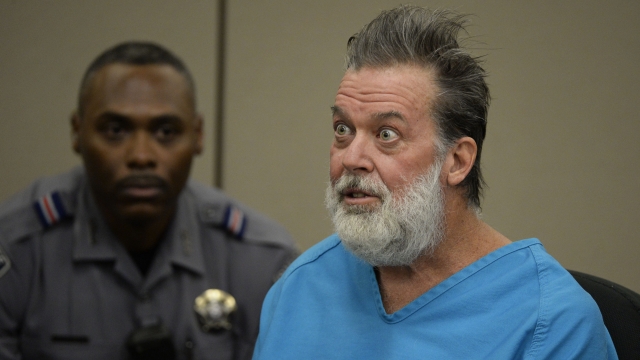 Robert Lewis Dear, the man who admitted to killing three people at a Planned Parenthood clinic in Colorado Springs last year, has been found unfit to stand trial and will instead be sent to a state mental hospital. At least, for now.

Dear met with two state-appointed doctors who found the gunman has a type of delusional disorder. The judge on the case wrote Dear had "significantly paranoid ideas about him being targeted for persecution by federal authorities." He claims the government has been after him for more than 20 years for his belief system.

The ruling basically puts the case on pause while Dear undergoes treatment that's meant to restore him to competency. The state will receive status reviews every 90 days.

Prosecutors are obviously not pleased. They'd argued psychologists weren't neutral, and when questioned about the ruling, the district attorney simply said, "It is what it is."

In court, Dear has had pretty consistent outbursts, including on Wednesday when he yelled, "Anybody want to know why I did it?" In December, he screamed, "I am a warrior for the babies" and tried to fire his public defenders.

Dear has been charged with 179 felony counts for the shooting on Nov. 27, including first-degree murder. His first status review is due Aug. 11.

This video includes images from KMGH, KOAA and CNN.