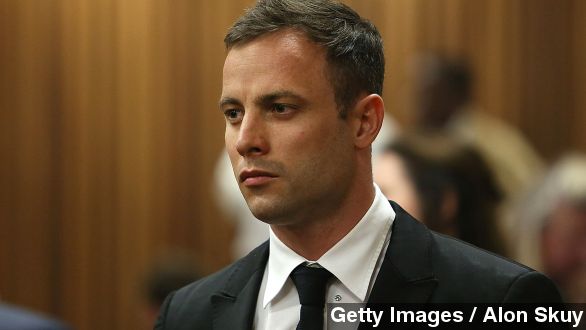 By Jay Strubberg
October 21, 2014
One of the world's most high-profile trials in years is over as a judge sentenced Oscar Pistorius to prison for the shooting death of Reeva Steenkamp
SHOW TRANSCRIPT

A South African judge has sentenced Oscar Pistorius to five years in prison plus other punishment for the shooting death of his girlfriend, model Reeva Steenkamp.

Additionally, Judge Thokozile Masipa gave Pistorius a three-year sentence for a firearms charge, but that prison time was suspended. It isn't clear if his defense attorney was simply posturing, but Pistorius' lead attorney told reporters he expected the former Olympian to be released to house arrest when he's eligible in 10 months.

While reading her decision, Masipa told the courtroom, "Sentencing is about achieving the right balance. Sentencing is not a perfect exercise."

Last month, Judge Masipa found Pistorius guilty of culpable homicide — comparable to manslaughter in the U.S. — for last year's shooting death of Steenkamp at his home on Valentine's Day. The case developed into one of the most widely-publicized trials of the century.

The sentencing hearing itself started Oct. 13 and lasted more than a week with several witnesses from both sides taking the stand. NBC called it "effectively a mini trial" to find out more about Pistorius' character.

While BBC reports there's no legal limit to the prison term Judge Masipa could've handed down, experts said the max sentence for culpable homicide is generally 15 years. The prosecution wanted at least a decade for Pistorius.

DEFENSE COUNSEL BARRY ROUX ON THE GUARDIAN: "He's lost everything. He was a iconic in the eyes of South Africans."

Pistorius's defense team argued he was not suited for a South African prison because they claimed the facilities didn't meet the standards required for someone with his disability.

The defense had asked that Pistorius be placed on house arrest or undertake community service instead — something the prosecution called "shockingly disproportionate."