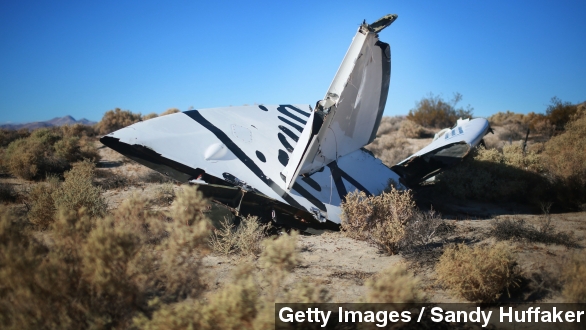 ACTING CHAIRMAN CHRISTOPHER A. HART, NTSB: "The feathers moved into the deployed position and two seconds later, we saw disintegration."

The NTSB's chairman was quick to add, however, that was "a statement of fact and not a statement of cause. We are a long way from finding cause."

Despite an early focus on new, allegedly unstable fuel and a rumored engine explosion, the NTSB doesn't appear to be focusing on either of those as possible causes. They noted one of SpaceShipTwo's pilots switched the feathers to "unlocked" earlier than they were supposed to, but a two-step system to actually deploy the feathers never happened and the devices shouldn't have engaged.

NTSB Chair Chris Hart also said there was no breach or burn-through of SpaceShipTwo's fuel tanks or engine, which matches up with how the rocket went down. (Video via National Transportation Safety Board)

ACTING CHAIRMAN CHRISTOPHER A. HART, NTSB: "The wreckage is located in a large area oriented northeast to southwest about five miles from end to end. And when the wreckage is dispersed like that, that indicates the likelihood of inflight breakup."

Had some kind of engine malfunction been behind the crash, the wreckage would most likely have been focused in one area and not spread across five miles.

While officials haven't ruled out any cause yet, The Wall Street Journal notes a structural issue would be a serious setback for Virgin Galactic and result in the company having to "redesign large portions of the rocket ship."

The crash of SpaceShipTwo, which took the life of one of the pilots and injured the other, and the explosion of Orbital Science’s Antares rocket have many questioning the viability of commercial space travel.

Even Virgin Group Founder Sir Richard Branson was frank when one BBC reporter asked if the crash would have any immediate impact on the future of space travel. (Video via Virgin Galactic)

The NTSB says the investigation will take about 12 months to complete, but the board will offer Virgin Galactic pertinent recommendations along the way to ensure an incident like this doesn’t happen again.