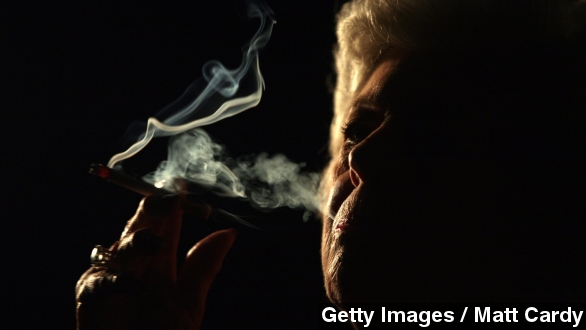 SMS
Pill Or Patch? Test Could Tell Best Way To Quit Smoking
By Cliff Judy
By Cliff Judy
January 12, 2015
Some scientists now say a blood test reserved for research can predict whether a pill or a nicotine patch is your best shot at quitting smoking.
SHOW TRANSCRIPT

For those truly addicted to smoking, the frustrations of quitting go well beyond mental fortitude.

Now, scientists say a strategy based on how your body breaks down nicotine might be the best way to kick the habit.

Researchers published their findings online Sunday in The Lancet. They argued blood tests normally reserved just for use in studies helped them know whether nicotine patches or pills helped each individual trying to quit more than the other.

"It's what actually gets you smoking, keeps you smoking," Dr. John Moore-Gillon of the British Lung Foundation told the BBC.

With nicotine, some scientists believe the faster our bodies break it down, the more often a smoker needs a cigarette and the harder it is to quit.

After observing more than 1,200 people trying to quit smoking, they found those whose bodies broke down nicotine normally had a better chance to stick to it while using the pill Chantix instead of a nicotine patch.

Chantix is a controversial drug because it has relatively impressive success rates in helping people quit, but that's paired with side effects like suicidal thoughts that are much more extreme than most quit smoking treatments. (Video via Pfizer)

You may have noticed lawyer commercials with ominous music. There are any number of litigators who'd love to sign you up for a Chantix class action lawsuit if you've experienced these side effects. (Video via Law Offices of James Scott Farin)

That's partially why researchers recommended the patch for people whose bodies broke down nicotine at a slower rate than normal. They had the same rates of quitting whether taking the patch or the pill, but they didn't have to go through Chantix's side effects. (Video via Nicorette)

But again, these blood tests are normally only used for research. While the scientists argued the tests could easily be used by the public, one researcher not involved in the study told the BBC the cost needs to be analyzed first.

Another told the outlet, "We know that if people try to quit unaided their chance of success for a year is about 4%. The way to succeed is to keep trying. It is like rolling a dice. If you keep rolling it you will succeed but if you stop rolling you will fail."

This video includes an image from Getty Images and Sharyn Morrow / CC BY NC ND 2.0.