Picking A Music Service Is Hard, Let Us Help 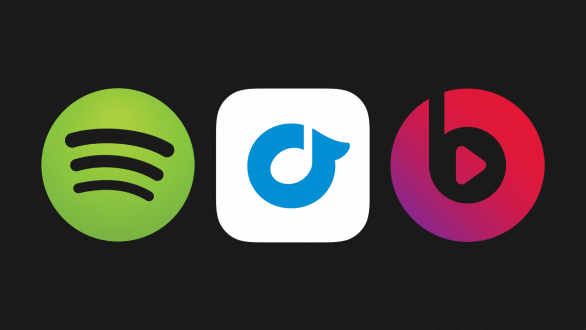 SMS
Picking A Music Service Is Hard, Let Us Help
By Mikah Sargent
By Mikah Sargent
January 7, 2015
Newsy takes a look at the top on-demand music streaming services to help you decide which service is right for you.
SHOW TRANSCRIPT

Finding, listening, buying, playing, streaming, sharing, liking, skipping — digital music can be overwhelming. And with the unending flow of new music streaming services, finding the right one can be quite the challenge.

So we decided to make things a bit easier for you. We tried out the top-rated on-demand music services to help you choose one that's right for you.

First: What's an on-demand music service? Well, unlike radio services where you listen to a stream of different songs without much choice in the matter, on-demand services let you choose the music you want to listen to. And we like choice!

When it comes to choosing the right service, we think there are three main considerations: price, selection and ecosystem.

Let's start with price. Most music streaming services are freemium, meaning users can access some features for free but have to pay for others. That gives the user two basic options: free and paid. Normally, free services are ad-supported and have certain restrictions like requiring the user to shuffle songs instead of play them in order. Paid normally give users access to music on their mobile devices and higher-quality audio.

Spotify is a freemium service where users can access any song at any time on a desktop for free but with ads. By paying the $9.99 per month Spotify charges for premium, users can stream higher-quality audio ad-free on desktop and mobile.

Last but not least, Rdio. Much like Spotify, the service has two tiers: free and unlimited. The free service is ad-supported. Rdio Unlimited will run you $9.99 a month for ad-free listening.

But because of that pesky "more than" quantifier, it's hard to say if one library really has more songs than another.

Our recommendation? Snag the free trial from Beats and try the free services from Spotify and Rdio. If the music you like isn't on one of the services, you know it's not for you.

Last on the list is ecosystem. Can you listen from your phone, your tablet, your smart TV?

With the exception of Beats Music (which isn't available in BlackBerry's app store), each of the services has an app for all the major smartphone platforms.

Beats Music is available on your phone, your tablet and your computer. No smart TVs, however.

Rdio is similar. It has apps for your phone, your tablet and your computer, but no smart TVs at the moment.

If streaming music from your television is important, then you've got your answer. Spotify is the only one on the list with a smart TV app.

But what if it's not? Well, there are some unique features available to each service that could help you make your choice.

For example, Beats Music touts its human curation, even calling itself "a music service with heart." It has some innovative features for music recommendations like "The Sentence," which allows you to craft a Mad Libs-style sentence for the perfect playlist at any given moment.

Spotify regularly publishes "Spotify Sessions," which are stripped-down live sessions with various artists. It also has a thriving app catalog with software aimed at helping you discover new tracks and improve your listening experience.

Like PartiQ, an app that lets you and your friends queue up songs from Spotify during a party so everyone gets to be the DJ. (Video via YouTube / Flatmate Web & Digital)

And the company recently launched a new feature that shows you the music your friends are listening to. It creates a playlist called "Top Tracks in Your Network."

Of course, a fairly similar feature has been present in Rdio for some time. And Rdio features a special music station tuned according to the songs you've been listening to. It's constantly adapting with each new song you play.

There's something to like about each of the major on-demand platforms. Personally, I use Spotify regularly, but I really dig Beats Music's curation — it just gets me. And Rdio seems a lot like Spotify; I could see myself happily using it if I didn't sign up for Spotify first.

But — unless human curation is of utmost importance to you — we would have to recommend Spotify as your go-to on-demand streaming service.

Spotify's massive library, its thriving app catalog, its ever-so-slightly bigger ecosystem and engaging live sessions all make it the best choice on the list.

Unless you listen to Taylor Swift. Then you're probably going to want to pass on the Spotify subscription. (Video via Republic Records / Taylor Swift)

This video includes images from Getty Images and Rdio and music from Pierlo / CC BY 3.0.