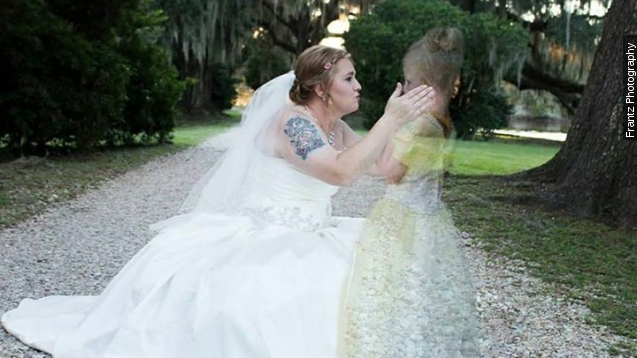 SMS
Photographer Includes Bride's Late Daughter In Heartbreaking Photos
By Samantha Crook
By Samantha Crook
December 16, 2015
A Louisiana bride wanted her daughter, who died from cancer, to be a part of her day. Her friend and wedding photographer found a way to include her.
SHOW TRANSCRIPT

A wedding can be a difficult time when important family members aren't there to celebrate.

But one photographer tried to ease just a little of that pain for a bride who lost her 6-year-old daughter to cancer.

Amanda Crowe Freebird wanted her daughter Azalee, who died from cancer two years ago, to be a part of her day. So her friend and wedding photographer placed translucent images of Azalee into some of the photos.

Azalee was never able to meet her mother's groom-to-be, Chip, according a Facebook post from the photographer, Ashley Frantz.

Frantz has received a lot of positive response to the photos. In a Facebook post, she said, "I'm so thankful God has given me a talent that I can use to make broken hearts just a tad less broken."

This video includes an image from Quan Ha / CC BY 2.0.