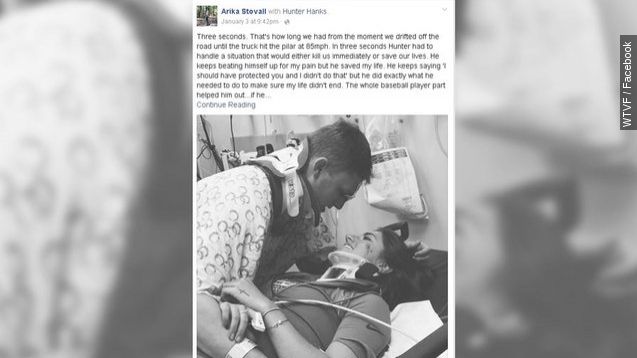 By Christine Slusser
January 8, 2016
After a couple survived a horrifying car crash in Tennessee, they shared a precious moment, captured in a photo.
SHOW TRANSCRIPT

Neck braces, a mangled Toyota — but smiles all around. This photo of a young couple after a car crash has gone viral.

"I don't know how we lived through that," Arika Stovall told WTVF.

"The picture of Hunter's mangled Toyota Tundra provides context to injuries on his face," a WTVF reporter said.

"I got a good gash across the forehead here," said Stovall's boyfriend, identified only as Hunter.

Neither the driver of the Toyota, Hunter, nor his girlfriend, Arika Stovall, remember how the crash happened. Newsy's partners at WTVF said the couple were on their way home from Florida, and the next thing Hunter says he remembers is waking up mere seconds before slamming into a bridge in Tennessee.

Arika wrote a long Facebook post which included the now-viral photo. She noted it was a miracle neither had broken bones or any sort of internal damage. She also mentions seeing a man with a beard after the crash and called him her "guardian angel."

She wrote: "All of our belongings in perfect condition besides a few things here and there ... and the only thing left behind at the crash scene is Hunter's bible open, with a page marked with scripture telling us to not be afraid; Jesus is with us."

The picture was taken when Hunter visited Arika in her hospital bed.

"All I cared about was seeing her and making sure she was OK before me. I didn't care what happened to me as long as she was all right," Hunter said of the photo, which has now gone viral.

The photo has been shared hundreds of thousands of times across the world.

"I'm just happy that so many people have been touched by it," Arika said.