Rodrigo Duterte Wants To Restore The Death Penalty In The Philippines 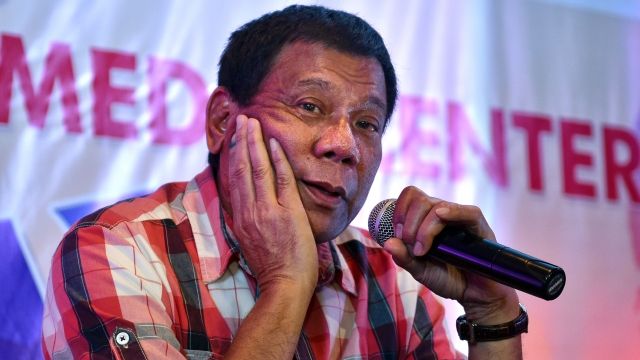 SMS
Rodrigo Duterte Wants To Restore The Death Penalty In The Philippines
By Briana Koeneman
By Briana Koeneman
September 27, 2016
The country's leader said he wants to bring back the death penalty for heinous crimes "in case there is no God."
SHOW TRANSCRIPT

The Philippine president asked reporters this question as he called for the country's death penalty to be reinstated.

"What if there is no God?" Philippine President Rodrigo Duterte asked.

Duterte argues the law lost its effectiveness because it wasn't being fully implemented.

And he claims presidents before him gave in to the Catholic Church and other "bleeding hearts" who were against capital punishment.

The death penalty was outlawed in the Philippines in 2006, due in part to pressure from the church. But the legislature can restore it.

And even before he was inaugurated in June, Duterte has demanded that people who commit "heinous crimes," like rape, be put to death.

Since taking office, Duterte has killed thousands of people as part of his war on drugs, according to recent numbers.

But during his speech Monday, Duterte brought up the case of Peter Scully, who's being investigated in connection with the rape of a baby girl and the death of a 12-year-old.

"When a 1-year-old, an 18-month-old baby is taken from the mother's arms, brought under a Jeep and raped and killed, so where is God?" Dutrete asked.

The revival of the death penalty discussion is part of more than a dozen priority bills Duterte wants the Philippine Congress to expedite.