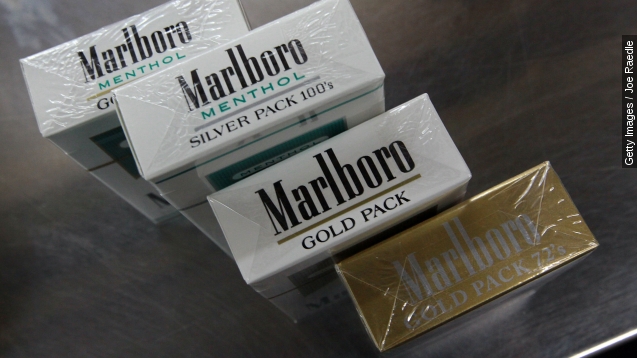 Philip Morris International, maker of Marlboro cigarettes, is fighting a new ruling in the U.K. that requires all cigarettes be sold in plain packaging.

U.K. Parliament enacted the rule in March. It will require all cigarettes sold in the country be packed in plain boxes by 2016. PMI has sued, contending the rules would "unlawfully deprive" it of its trademarks. (Video via U.K. Parliament)

PMI says its branding — those red ribbons, for example — is too important a part of the market economy to just legislate away.

PMI's general counsel wrote, "We respect the government's authority to regulate in the public interest, but wiping out trademarks simply goes too far."

The U.K. Department of Health points out smoking causes some 80,000 deaths a year, making it the leading preventable cause of death in the country. In other words, the government is ready to fight this one. (Video via BBC)

A spokesman told the BBC, "We will not allow public health policy to be held to ransom by the tobacco industry."

The legal challenge is the latest front in a worldwide shift toward hard truths in tobacco marketing. (Video via Tobacco Free New York State)

The new packaging will not only eliminate brand marks but also carry graphic warnings of the damage smoking can cause to the body.

Australia's already using the new packaging and saw a 78 percent increase in calls to smoking hotlines. The World Health Organization says there aren't any other apparent factors that would cause that number to jump.

U.S. regulators had plans to require similar graphic warnings until 2012, when the tobacco industry got the rules overturned in the D.C. Court of Appeals.

And cigarette makers are still pushing back: In April, a group of companies filed suit against the U.S. Food and Drug Administration over rules that require them to submit any changes they make to their brand packaging for approval.