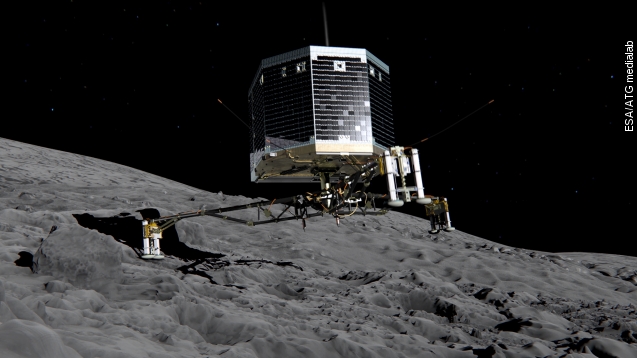 SMS
Philae Lander Phones Home After 7-Month Nap On Comet
By Evan Thomas
By Evan Thomas
June 14, 2015
The Philae lander has enough power to resume some science operations on comet 67P-CG, according to mission controllers at the European Space Agency.
SHOW TRANSCRIPT

The Philae lander has come back online and made contact with Earth after hibernating for seven months on the surface of comet 67P-CG.

The European Space Agency recorded 85 seconds of contact through the Rosetta orbiter, during which Philae passed on current and historical data it had collected on conditions on the surface of the comet. (Video via ESA)

Philae is reporting a charge of 24 watts, or a roughly 17 percent of its battery capacity. Controllers say it's enough to resume science operations, including drilling into the surface to analyze the comet’s composition in more detail.

Philae shut down in November of 2014 when complications during landing put it in the shadow of a cliff instead of direct sunlight.

This cut down on the vital solar exposure Philae needs to charge its backup power cells: Instead of the six-plus hours of daily sunlight its designers had initially planned for, Philae gets about 90 minutes.

So researchers reprioritized their science plans. Once Philae's initial 60-hour battery charge ran out, it entered hibernation, and the mission became a waiting game. (Video via ESA)

This first contact in months means scientists could get the chance to try some of their experiments again, but the connection is still spotty. After that 85-second message, ground stations lost contact again. (Video via ESA)

Still, it's looking good for the little lander. As Comet 67P-CG orbits closer to the Sun, controllers hope Philae will get more sunlight for longer period of time to keep itself going.

This video includes images from the European Space Agency and DLR German Aerospace Center / CC BY 2.0.