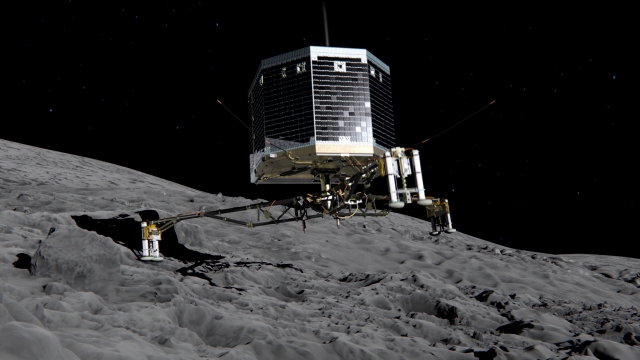 SMS
Philae Lander Is Likely Silent Forever On The Dark Side Of A Comet
By Ethan Weston
By Ethan Weston
February 13, 2016
After two rough years in space, the Philae Comet Lander will likely never make contact with Earth again.
SHOW TRANSCRIPT

The lander had a rough life. During its 2014 landing, it aimed for a sunny spot on the comet, but it bounced off the surface and into the shade. Without light, Philae had to make do with a single charge for all its scientific endevours.

Despite that, some scientific data was beamed back to Earth before its battery died, including the composition of the comet's interior and exterior. It detected organic molecules on the surface.

All is not lost, though. Philae's mothership, Rosetta, is still orbiting the comet and sending back images and information.

Like this: The comet is "singing" thanks to weird oscillations in its magnetic field.

Rosetta has a little less than a year left in its life, though, and it will eventually become another "lander" of sorts for the comet. This fall, it'll make a slow descent toward the comet, gathering data on the way until it crashes into it.

Soon both craft will be together again, hurtling through space at 34,000 mph.

This video includes clips and images from the European Space Agency.