Philadelphia Colleges On Alert After Threats Posted On 4chan 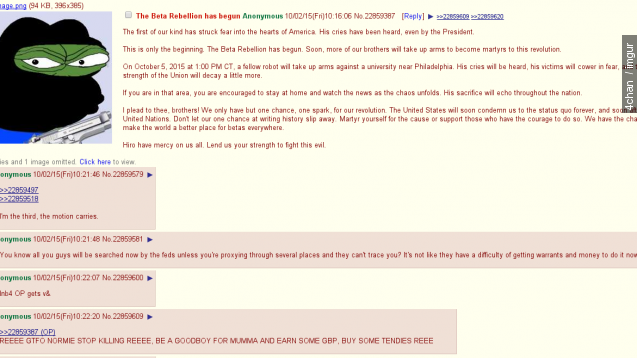 SMS
Philadelphia Colleges On Alert After Threats Posted On 4chan
By Matt Moreno
By Matt Moreno
October 5, 2015
A safety alert was issued by the FBI and ATF after an anonymous user posted threats to the image-sharing website 4chan.
SHOW TRANSCRIPT

Colleges in Philadelphia are on high alert Monday after a posting on 4chan threatened violence against unspecified schools.

The safety alert came from the FBI and ATF and includes Temple University, Drexel University, University of Pennsylvania and other local colleges.

The FBI released a statement on the matter, but noted the threat was non-specific and told students to "follow the guidance of their campus security officials."

Multiple outlets linked to this screenshot of a 4chan post. The post reads, in part, "On October 5, 2015 at 1:00 PM CT, a fellow robot will take up arms at a university near Philadelphia. ... If you are in that area, you are encouraged to stay at home and watch the news as the chaos unfolds."

4chan is known as one of the Internet's most popular and darkest places. While the anonymous image board is usually the hatching place of harmless Internet memes, it's also been caught up in plenty of controversy.

In November 2014, an Oregon man was arrested for murder after he allegedly strangled his girlfriend and posted pictures of her body to the website.

Just a few months earlier, in August, the site was also the source for a dump of celebrity nude photos.

There have also been reports that the Umpqua Community College gunman posted to the site before the massacre, but authorities have not confirmed that.

Temple, Drexel and Penn are all expected to remain open on Monday with increased security.

This video includes an image from Drexel University.