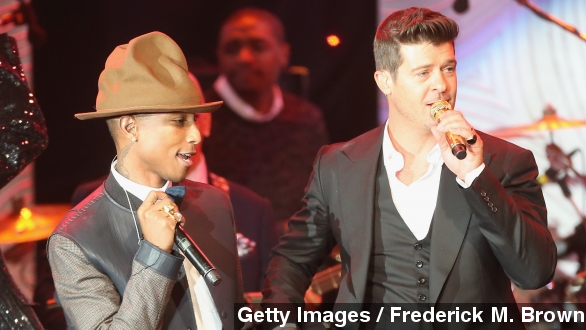 SMS
Pharrell, Thicke Must Pay $7 Million For 'Blurred Lines'
By Lauren Zima
By Lauren Zima
March 10, 2015
Robin Thicke and Pharrell said they evoked the "feel" of Marvin Gaye, but a jury says they're guilty of copyright infringement.
SHOW TRANSCRIPT

A decision has been reached in the lawsuit over whether Pharrell and Robin Thicke were inspired by or, well, stole from Marvin Gaye's music for their big hit "Blurred Lines." After eight days of testimony, a jury ruled the singers must pay Gaye's family $4 million in copyright damages, plus more than a million more each in profits.

Unbelievably, the song made about $16 million in profits. And, unbelievably, Gaye's estate wanted $25 million in the case. But even getting this much is a big deal.

The Hollywood Reporter has closely followed the case and makes a few key points:

-Most cases like this don't make it to trial, they settle out of court, which makes this one even more high-profile and sets even more of a precedent about copyright lawsuits.

-Thicke and Pharrell admitted they looked up to Gaye — Pharrell said his music channeled a "70s feel." But that ultimately didn't matter.

The lawyer for Gaye's estate used musicologists to examine the songs, and the jury ruled Thicke and Pharrell had infringed.

It was apparently quite an interesting trial. Variety reports Thicke even sang and played the piano in court at one point.

And The Wrap says there was "an audible gasp" when the verdict was read. The outcome had felt very up in the air.

But The Hollywood Reporter declares it "might now be the landmark legal controversy over songcraft."