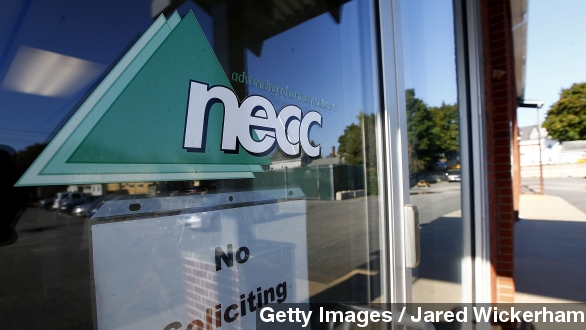 After a string of arrests early Wednesday, owners and employees of the now-defunct New England Compounding Center have been charged for their roles in the 2012 meningitis outbreak.

Department of Justice officials filed 131 criminal charges against 14 individuals Wednesday, charges which include multiple counts of 2nd-degree murder and racketeering.

They say the NECC employees ignored their own safety protocols, sending out drugs they knew had a high likelihood of being contaminated. (Video via ABC)

In a press conference, U.S. Attorney Carmen Ortiz said, "The indictment alleges that the most senior pharmacists, pharmacists working in clean rooms at NECC, had knowledge that the drugs that they were making ... were made in a thoroughly contaminated lab."

The 2012 outbreak resulted in 64 deaths and hundreds of illnesses. Shortly after it began, authorities pointed the finger at NECC, which had manufactured steroid shots linked to the spread of the disease.

The shots were intended to be injected into the spine as a common remedy for back pain. The bacteria inside just so happens to attack the lining of the brain and spinal cord. (Video via WPRI)

Before Wednesday, only one person had been arrested in connection with the case, and victims still haven't been compensated. One man who survived the infection told WJBK he was thrilled by news of the arrests.

"It definitely was an early Christmas present. ... They have basically sickened hundreds of people and murdered a few dozen to put money in their pocket," Bill Thomas of Ypsilanti, Michigan said.

A proposed deal would set up a $135 million fund to compensate the victims, the largest part of it coming from the NECC's owners themselves, but the plan has been in court most of the year and still hasn't been approved by a judge.