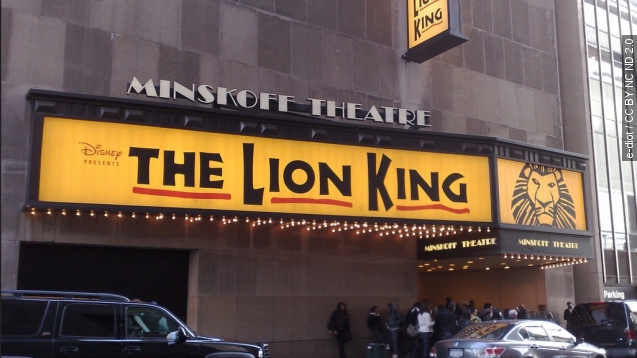 SMS
'Phantom' & 'Lion King' Lead Broadway Despite Their Age
By Katherine Biek
By Katherine Biek
May 27, 2015
While being some of the longest-running shows on Broadway, "The Lion King" and "The Phantom of the Opera" still lead the Broadway pack.
SHOW TRANSCRIPT

Broadway just had a record-setting year, with a total box office gross of $1.36 billion and a total attendance of 13.1 million.

And the Great White Way should be thanking some of its longest-running residents for those high numbers.

"The Lion King" raked in $2.06 million after 52 weeks of performances, making it the highest grossing show on Broadway for the year. (Video via YouTube / Disney on Broadway)

And "The Phantom of the Opera" pulled in just over $1 million, selling 98 percent of its available tickets for the year.

Not too shabby when you take into account that the average price for "Phantom" tickets was about $65 cheaper than those for "The Lion King."

But this means these veteran shows are still able to pull in massive audiences each night. "The Lion King" has been on Broadway since November 1997, making it the fourth-longest running show ever after 17 years.

And "Phantom" holds the coveted title of the longest-running Broadway show ever after 27 straight years of performances.

Both shows have been incredibly successful on the awards circuits, as well, with 70 awards each under their belts. Both have won the Tony for Best Musical, and "The Lion King" has the distinction of having the first female director ever to win the Tony for Best Direction of a Musical.

And it also helps that thanks to movie adaptations, these two stories are household names to tourists from all over the world.

Still considered one of the best animated films, Disney's "The Lion King" is the second-highest grossing animated movie of all-time having made more than $422 million at the U.S. box office.

And the 2004 version of "The Phantom of the Opera" starring Gerard Butler and Emmy Rossum was nominated for several Golden Globes and Academy Awards.

Just goes to show you that oftentimes the oldies are the goodies.