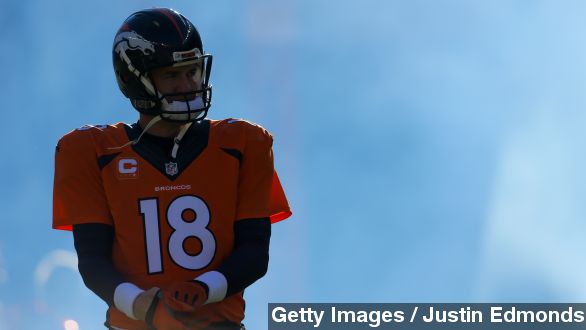 SMS
Peyton Manning's Pay Cut Paves Way For Supporting Cast
By Matt Moreno
By Matt Moreno
March 5, 2015
The soon-to-be 39-year-old quarterback was rumored to be considering retirement. This will be his 18th season in the NFL.
SHOW TRANSCRIPT

He's not going anywhere just yet. Multiple outlets are reporting Broncos quarterback Peyton Manning is returning to the team instead of retiring.

ESPN reports that while Manning will be back, he'll be making about $4 million less this year after taking a pay cut.

Ever since the 2014 NFL season ended with an early playoff exit for the Broncos, there'd been talk about the soon-to-be 39-year-old quarterback potentially retiring.

But those rumors never gained much traction and his return was somewhat expected. The Denver Post writes, "Manning seemed ready to announce his return a month ago but the Broncos' desire to reduce his earnings became a three-week delay."

Manning's pay cut means he'll earn about $15 million next season and puts the Broncos about $20 million under salary cap. Though his bank account might be slimmer, the pay cut could help fatten up his numbers on the field.

As USA Today points out, the five-year contract Manning signed in 2012 requires him to get a physical every offseason. Doctors will likely take a good, long look at the QB's quad, which he injured toward the end of last year but played through.