PetSmart Bought For $8.7B Amid Declining Sales 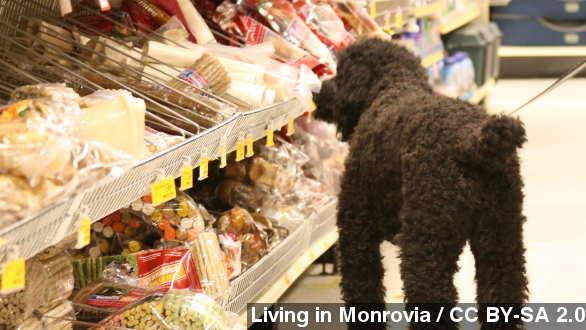 PetSmart agreed to a $8.7 billion buyout late Sunday night to a group led by British firm BC Partners, Inc. The investment group is paying $83 in cash per share, roughly 39% more than the company's price on July 2. (Video via PetSmart)

In Mid-August, not long after those July numbers were released, Investor Jana Partners announced  the company planned to explore a sale.

And much of the blame, or praise, is being put on Amazon. Both Bloomberg and USA Today point to the online-retail giant as being the biggest factor into cutting PetSmart's sales.

And the fight over PetSmart was reportedly a competitive one. Time says Apollo Global Management was the alleged front runner as recently as Saturday, but, "This would suggest that BC Partners made a last-minute move to best Apollo."

The deal is a late one, gaining approval just before the year wraps up — a year defined by big company acquisitions.

"We thought we had had already seen the flurry of deals hit the market in 2014, but clearly investors, companies are still finding a way to make deals happen before the year end. ... We have seen $2.6 trillion years of M&A. That's a 60% rise from the same period in 2013," CNBC's Shereen Bhan reports.

The deal still needs to go through shareholders and government regulators and is expected to be officially closed by the first half of next year.