Peterson, Vikings Still Have Work To Do After New Contract 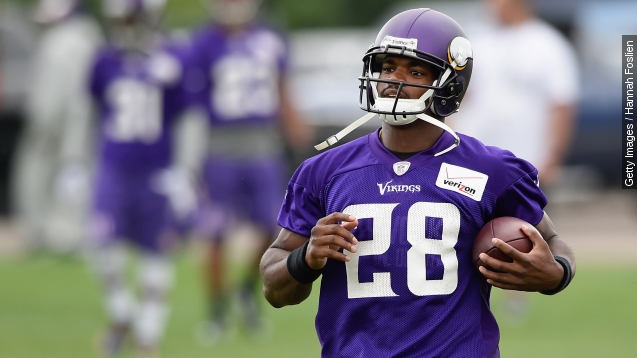 SMS
Peterson, Vikings Still Have Work To Do After New Contract
By Matt Moreno
By Matt Moreno
July 22, 2015
The Minnesota Vikings and running back Adrian Peterson agreed to a restructured deal Tuesday, but the two sides still have problems to tackle.
SHOW TRANSCRIPT

After mudslinging from both sides, the Minnesota Vikings and running back Adrian Peterson have made nice. The Vikings and Peterson reportedly agreed to a restructured deal Tuesday that keeps Peterson in town for at least another three years.

This, about a year after Peterson was arrested in relation to child abuse charges. Peterson pleaded no contest to misdemeanor charges and wasn't required to serve any jail time. (Video via KRIV)

The base of the deal has Peterson earning less money — $44 million instead of $44.75 million over three years — but gives the running back more guaranteed money.

Peterson, this offseason, reportedly wanted out of Minnesota after spending nearly all of last year on the commissioner's exempt list.

But he's since come around. Peterson showed up to OTA's in early June, a move, Yahoo reports, that seemingly helped mend the two side's relationship.

And from the sound of it, this isn't a restructured deal just to get a trade done. Peterson and the team that drafted him seventh overall in 2007 are committed to each other.

Peterson and the Vikings released statements Tuesday. The Vikings called Peterson a "valuable part" of the organization as Peterson thanked the Vikings for the "additional security" the contract provides. (Video via KMSP)

While both sides may be happy with a new deal and relationship in place, a writer for Bloomberg clearly isn't. "You have a guy who hasn't played in a year, and who's an admitted child abuser, gushing about the 'additional security' he managed to squeeze out of a terrible situation he happened to create. That's 'fairness' in the NFL: If you have enough talent, you can act like a child, even when you endanger one."

The Vikings went 7-9 last year and finished middle-of-the-pack in rushing. Now, with the NFL's 2012 MVP back in purple and gold, Minnesota hopes to turn things around this year both on and off the field.